Sushma Swaraj back with a bang

Says govt has taken up with US the issue of hate attacks. 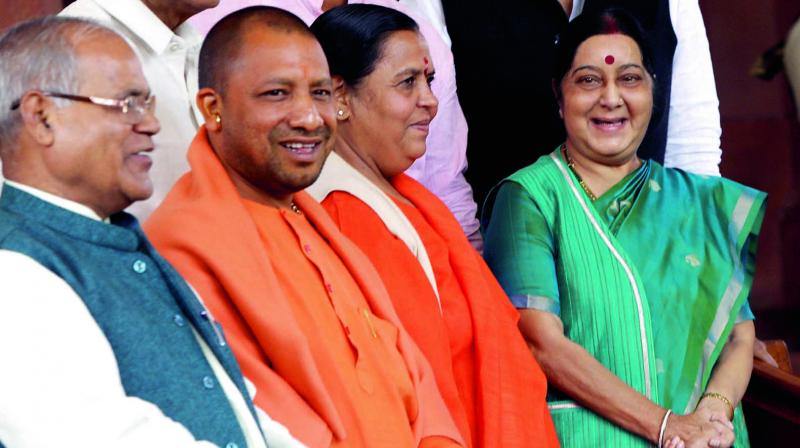 New Delhi: Members in the Lok Sabha, cutting across party lines, on Wednesday extended a warm welcome to external affairs minister Sushma Swaraj when she came to the House after a long absence due to health reasons.

As soon as she was spotted stepping into her front-row seat after the Question Hour, members began thumping their desks and it continued for some time as she took her seat. Greeting 65-year-old Ms Swaraj, Speaker Sumitra Mahajan wished her a long and healthy life. A smiling Ms Swaraj, appearing a little wan, accepted wishes from her and other members.

Union ministers Uma Bharti and Sadananda Gowda as also Congress leader Jyotiraditya Scindia then went to her to wish her. Leader of the Congress in the House Mallikarjun Kharge welcomed her from his seat and wished her a long and healthy life in serving the nation.

Meanwhile, Ms Swaraj indicated on Wednesday that there was no reason for the Indian government to issue an advisory for citizens travelling to the United States despite recent attacks on both Indians and persons of Indian origin there. She said that the US government has given India “confidence that these incidents are acts of individuals and do not represent the overwhelming sentiments of the American people towards India”. She also told the Lok Sabha that India had conveyed its concerns to the US government at “very high levels”, and that New Delhi had already “called for necessary measures to ensure the safety and security of the Indian diaspora and expeditious investigation into these incidents”. She said the “US authorities have responded strongly and assured us that they are working with all concerned agencies to ensure speedy justice”.

Pointing out that “in the last three weeks, three incidents of physical attack in the United States on Indian nationals and persons of Indian origin have come to the notice of the government,” Ms Swaraj, in a statement to the Lok Sabha, said, “A related question was raised... on whether the government plans to issue an advisory for Indians travelling to or residing in the US. I would say that prompt and clear response of the US political leadership and the law enforcement authorities to these incidents, and the widespread messages of sympathy and support from all quarters in the US, give us confidence that these incidents are acts of individuals and do not represent the overwhelming sentiments of the American people towards India...”

This was demonstrated by the American national Ian Grillot who suffered serious injury while helping the two Indians. I have saluted his heroism and am sure the House joins me in wishing him speedy recovery.”

She also said, “I would like to reassure this House and the members that the safety and security of the Indian diaspora abroad remains a top priority for this government. We are in continuous dialogue with the US government. Close contact with local Indian community groups are being maintained through our embassy and consulates to address any emergent issues... The government has taken up this issue with the US government at very high-levels and conveyed our deep concerns. We have called for necessary measures to ensure the safety and security of Indian diaspora and expeditious investigation into these incidents.”

The external affairs minister said, “The foreign secretary (S. Jaishankar) discussed this matter in his meetings with Cabinet ministers and senior functionaries of the US administration as well as with the Congressional leadership during his recent visit to the US (February 28 to March 3, 2017),” adding, “People-to-people contacts are the foundation on which the India-US strategic partnership has been built. The fact that broad sections of the American society have expressed their deep sorrow and regret over these incidents reassures us that despite these individual incidents, the American society values the people-to-people engagement between our two countries.”

On a reported travel advisory being issued by the US earlier for its citizens travelling to India, Ms Swaraj said, “I would like to inform the honorable members that there is no travel advisory in force for India at present. A reference to India has been included in their ‘Worldwide Caution’ report which the US state department releases every six months (in March and September every year). These are in the form of broad assessment of threat perceptions. Such references to India have been included in previous reports as well and do not reflect the change of administration in the US. In fact, India-specific references were far more detailed in previous reports. Having said that, issuing travel advisories is a well-established global practice and the government of India has also issued travel advisories in the past for Indian citizens visiting the US in specific situations.”

On February 22, Srinivas Kuchibhotla, a 32-year-old Indian engineer was shot dead by a US national, Adam Purinton, in a crowded bar in the Kansas City suburb of Olathe. Another Indian national, Alok Madasani, who was present on the spot, was also injured in the shooting. The Indian government has said US authorities are investigating the incident as a hate crime. On March 2, Harnish Patel, a US national of Indian origin, was shot dead by unknown individuals in Lancaster, South Carolina. According to the sheriff and the family, the incident was, in all likelihood, a case of robbery gone wrong, the minister said, adding that investigations were underway to identify the culprits and to ascertain if this was a racially motivated crime. On March 4, Deep Rai, a US national of Indian origin, was shot at and injured by an unknown person in Kent, near Seattle in Washington state, allegedly after being asked to leave the country. The Kent police department is probing the case, assisted by the FBI. The investigating agencies are yet to establish that it is a “hate crime”, Ms Swaraj said.