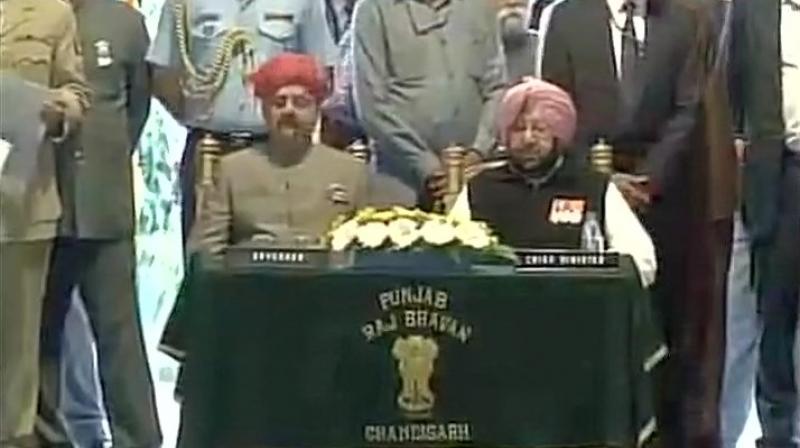 Chandigarh: After steering the Congress to a stupendous victory, Amarinder Singh took oath as Punjab chief minister on Thursday.

75-year-old Amarinder was sworn in as the state's 26th chief minister along with nine ministers, including Navjot Singh Sidhu.

Speculation was rife that the cricketer-turned politician would be given the post of deputy chief minister but he was the third among the list of nine ministers sworn in Thursday.

Two Ministers of State Aruna Chaudhary and Razia Sultana - both women- were sworn in at the ceremony attended by former Prime Minister Manmohan Singh and Congress Vice President Rahul Gandhi among others.

The ceremony was held at the Raj Bhavan here and the oath was administered by Governor V P Singh Badnore.

Congress sources said that an expansion of the state cabinet would take place at a later date.

The state can have a maximum of 18 ministers including the Chief Minister. The Congress has 77 MLAs in the assembly.

Amarinder had announced that the oath taking ceremony would be a simple affair in view of the financial crisis facing the stage. This will be Amarinder's second stint as chief minister.

Congress under the leadership of Amarinder had won 77 seats in the 117 member Assembly elections wresting power from the SAD-BJP alliance which was relegated to the third spot with 18 seats.