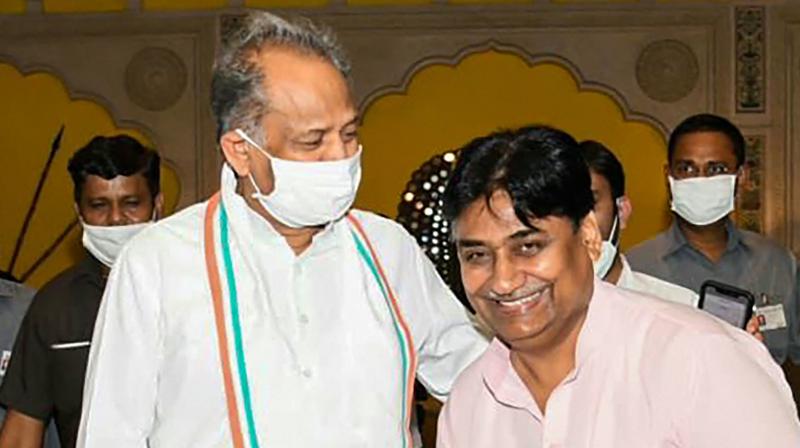 New Delhi: Aggravating the political crisis in Rajasthan, the Congress Party on Tuesday sacked Sachin Pilot from the posts of deputy chief minister and state president of the party and in the process put the Ashok Gehlot government on the brink.

Minutes after his removal as Rajasthan deputy CM, rebel Congress leader Sachin Pilot said "truth can be rattled, not defeated". He also changed his profile on Twitter deleting all references to his position as deputy CM and Rajasthan Congress chief and only described himself as MLA of Tonk and a former minister of IT, telecom and corporate affairs, Government of India.

Soon after the Congress Legislature Party meeting where these decisions were taken, Mr Gehlot drove to the Governor’s residence and briefed him on the political developments. Sources in the chief minister’s camp said he has the support of 109 MLAs.

However, some MLAs belonging to Mr Pilot’s camp rubbished this claim and demanded a floor test in the state Assembly to know the number of legislators backing Mr Gehlot.

“A floor test should be conducted in the Assembly. This will expose the claim that the Ashok Gehlot government has the support of 109 MLAs,” MLA Ramesh Meena, who is aligned with Mr Pilot, said.

Senior party leader and Sardarshahr MLA Bhanwarlal Sharma too claimed that the figure of 109 being projected in support of the chief minister is incorrect. The MLA said he will not join the BJP but wants a change in leadership.

"The figure of 109 being projected is completely fake. The Congress has 107 MLAs. We are 22 together and six more will join us. Not more than 81 MLAs are on the other side, otherwise what was the need to show the strength before the media and camp the legislators in a hotel," he said.

The demand for a floor test was echoed by Opposition BJP in the state.

Shortly after the CLP meeting, Congress spokesperson Randeep Surjewala said that Mr Pilot enjoyed the affection and blessings of Congress president Sonia Gandhi and was given political power at a young age.

“Yet, he and other ministers were trying to topple the state government as part of a BJP conspiracy. It cannot be acceptable to any political party. Therefore, the Congress took the decisions with a heavy hear”. Education minister Govind Singh Dotasara will be the new Pradesh Congress Committee (PCC) chief.

Mr Gehlot accused Mr Pilot of playing into the hands of the BJP and alleged that the saffron party wants to repeat what it had done in Madhya Pradesh.

“I am very sad that horse trading was going on. It is for the first time in the country that democracy is under such a grave threat”.