Have no issues with him: Punjab CM on Navjot Singh Sidhu's resignation

Sidhu, who announced his departure from Punjab Cabinet on social media, said resignation has been sent to Capt Amarinder Singh. 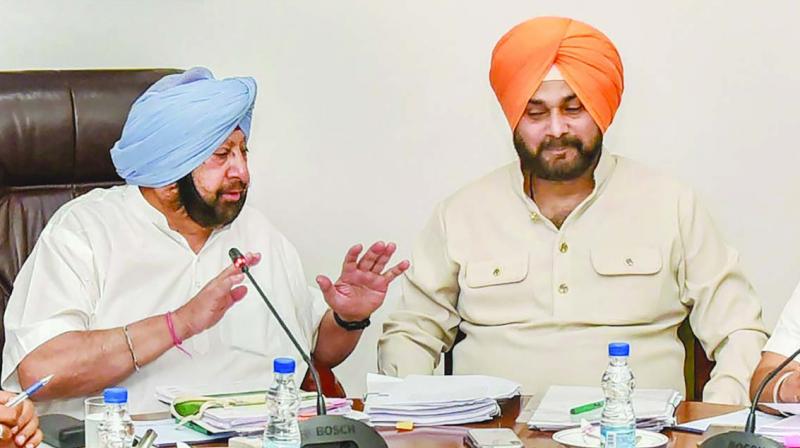 Taking it to Twitter, Sidhu confirmed that his resignation has been sent and delivered to the Punjab Chief Minister's official residence. (Photo: File)

Mumbai: After  Congress leader Navjot Singh Sidhu confirmed his exit from the Punjab Cabinet, Punjab Chief Minister Capt Amarinder Singh did not reveal on the final decision on the acceptance of Sidhu's resignation.

Amarinder Singh said, "I have no issues with him, I had in fact given him a very important portfolio after the reshuffle. It was his decision to quit the Cabinet. I have been told that he has sent the letter to my office, will go through it and then see what is to be done."

Sidhu, who announced his departure from the Punjab Cabinet on social media over the weekend, on Monday said the resignation has been sent to the Chief Minister Capt Amarinder Singh.

Taking it to Twitter, Sidhu confirmed that his resignation has been sent and delivered to the Punjab Chief Minister's official residence.

Today I have sent my resignation to the Chief Minister Punjab, has been delivered at his official residence...

This came after Sidhu was stripped of his portfolios of Local Bodies, Tourism and Culture ministries post his absence at the cabinet meeting and took a swipe at Amarinder in a press conference saying that he “cannot be taken for granted” and he is only “answerable to the people of Punjab”.

Tweeting a copy of his resignation letter on Sunday, Sidhu wrote, "My letter to the Congress President Shri. Rahul Gandhi Ji, submitted on June 10, 2019." Sidhu also said that he will send the resignation to the Chief Minister Amarinder Singh soon.

On June 10, Congress leader Navjot Singh Sidhu had met Rahul Gandhi and handed him a letter appraising about the political situation.