Mamata nephew's office will be locked up after May 23: PM Modi 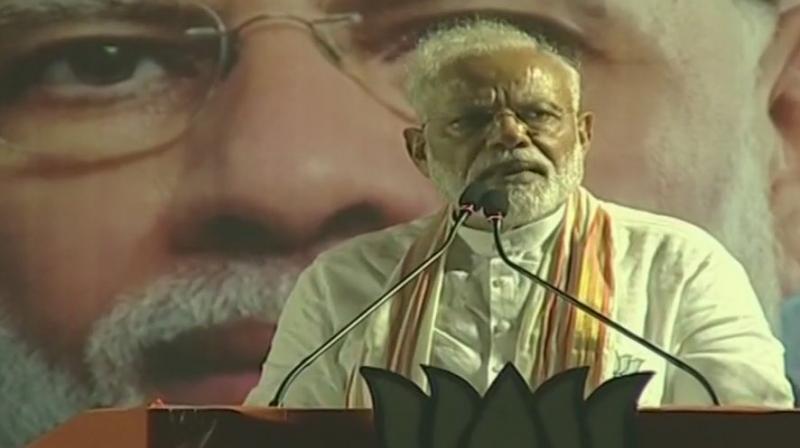 BJP will also ensure that Bengal's border gets modern fencing and infiltration is dealt with. (Photo: ANI twitter)

Diamond Harbour: Prime Minister Narendra Modi on Wednesday hit out at West Bengal Chief Minister Mamata Banerjee for her 'anarchist behaviour' in the state and said her nephew Abhishek Banerjee's office will be 'locked' up soon after the results of Lok Sabha polls.

"After election results, Didi's nephew office will be locked. I was told that his office, as per Trinamool Congress (TMC) tradition, was built after occupying the public road. Didi, your party has earned a lot by tolabaaji (extortion), at least do not occupy public roads for the construction of nephew's office," said Modi at an election rally here.

Abhishek Banerjee is the sitting MP of the Diamond Harbour parliamentary constituency in south 24 Parganas District.

"The whole country has seen what happened in Kolkata yesterday. Didi's administration and goons tried its best to harm BJP's roadshows in the city. But people of Kolkata have foiled their attempts," he said.

"Everyone knows how TMC has turned the republic into 'goonda tantra', BJP has been preventing from putting its viewpoint before the public. Our candidates are being prevented from contesting the elections. Now, Didi's 'goonda tantra will not work." Modi said.

He further accused Mamta of putting pressure on the state machinery.

"There is a lot of pressure on bureaucracy and police here, an example of this is the suicide of a former IPS officer. I am making a serious allegation, the person who spent his whole life protecting the common man of West Bengal was forced to end his life."

"Gurudev himself had never imagined such state of West Bengal. It has become a state where people are living in fear, IPS officer does not get justice. It is not difficult to guess that 'bua-bhatija' (nephew-aunt) jodi has a big role to play in it," he said.

Taking a jibe at TMC supremo, Prime Minister said: "It is Didi's generosity that people are completely free from fear in West Bengal? But who are these people? They are smugglers and intruders. Didi's tolabaaz and her syndicate, leaders involved in chit fund scam and coal mafias are roaming free without any fear."

"Here, teachers and government employees might not get their salaries and increment on time but rented goons of TMC are paid on time. Those who are corrupt have a problem with Modi and Vande Mataram. These are people who have problems with surgical strikes and air strikes. But Didi, this is not a time to take revenge, this is a time to bring change in Bengal," the Prime Minister said.

Prime Minister Modi further gave assurance of citizenship to refugees who migrated from Bangladesh, be it Hindus, Buddhists, Sikhs, Jains, or Christians as promised in BJP's 'Sankalp Patra'.

BJP will also ensure that Bengal's border gets modern fencing and infiltration is dealt with.

"Intruders will be identified and their biodata will be inspected. Borders will be protected via modern fencing. Not only this, the refugees who had faced sufferings due to faith, not need to worry. We are going to amend the Citizenship Act so that every child of Maa Bharti who has no place other than India gets citizenship," he said.

Since the Lok Sabha elections began on April 10, both BJP and TMC have been at loggerheads in West Bengal. Workers of two parties have repeatedly clashed with each other on polling days.

Voting for nine seats in the state will be held in the seventh and final phase of the general elections on May 19. Counting of votes will take place on May 23.