His bust is the latest victim in Indian politics. Who was Vidyasagar?

The usual blame game started immediately after the Miscreants entered the college and smashed the bust. 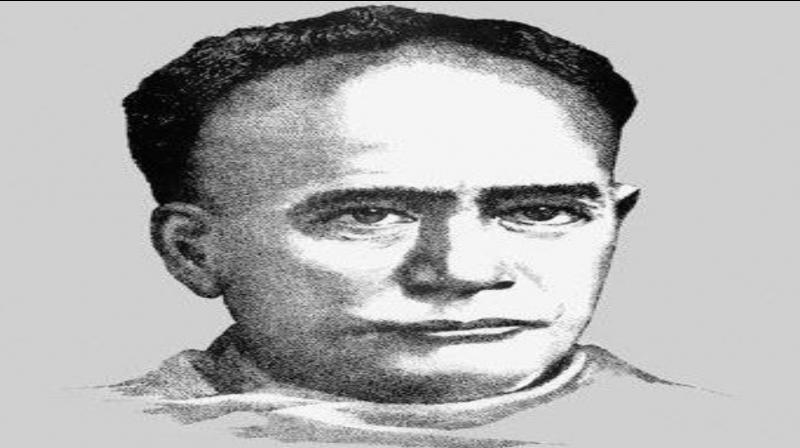 His image soon garnered the virtues of a well-known writer, philosopher and a crusader of humanity. (Photo: Twitter)

Mumbai: A key figure in the Bengal Renaissance and the voice of widow remarriage in India, Ishwar Chandra Vidyasagar’s bust was smashed to pieces by warring Trinamool and BJP workers during BJP party Chief Amit Shah’s mammoth roadshow in the heart of Kolkata on Tuesday evening.

Miscreants attacked the convoy of Shah when it was nearing Vidyasagar College on Bidhan Sarani and a free for all ensued with both sides beating each other up. Miscreants entered the college and smashed the bust, also setting ablaze several motorcycles parked inside the college.

Kolkata: Statue of Ishwar Chandra Vidyasagar was vandalised at Vidyasagar College in the clashes that broke out at BJP President Amit Shah's roadshow. #WestBengal pic.twitter.com/XSSWyYbMwu

The usual blame game started immediately with Bengal Chief Minister filing an FIR against Shah, while the BJP chief stoically maintained that the bust was broken by her cadres and that he was not afraid of her police action against him.

As the war of words continue, the common citizens of Bengal lament this dastardly act the bust of a man who wore many hats -- among them an educationist, a reformer, a writer, philosopher and a philanthropist.

Who was Vidyasagar? Know this reformer whose contribution to 19th Century India is unparalleled.

1. Known for his efforts for pushing the cause of widow remarriage, the revolutionary was born on September 26, 1820, to a poor Brahmin couple in West Bengal.

2. From a tender age, he was a keen learner and would later be known for his knowledge in Sanskrit. The poor financial condition never stopped him from studying. He read under a streetlight as affording a gas light at home was a distant dream.

3. From 1829 to 1841, he learned Vedanta, Vyakaran, literature, rhetoric, Smriti and Ethics in Sanskrit College. It was during a competition for testing Sanskrit knowledge in 1839 that earned him the title of ‘Vidyasagar’, which literally translates to ‘Ocean of Knowledge’.

4. His image soon garnered the virtues of a well-known writer, philosopher and a crusader of humanity.

5. He was a well-respected name under the British Raj in India. It was during this era that Vidyasagar infused a revolution in the Bengali education system and redefined the Bengali language. His book, ‘Borno Porichoy’ (Introduction to the letter), is still used as a primary guide to learn Bengali alphabets.

6. However, it was his path-breaking work in the field for education, especially for girls, that led to a sudden rise of his stature. Along with other reformers Ramgopal Ghosh and Madan Mohan Tarkalankar, he founded numerous schools for girls in the early 19th century.

7. He was the one who introduced Widow Remarriage Act XV of 1856.

8.  He died on July 29, 1891 in Kolkata. After his death, Rabindranath Tagore said, "One wonders how God, in the process of producing forty million Bengalis, produced a man!"