On day of counting, BJP candidate B Sriramulu is seen sitting in a prayer room, clad in saffron. 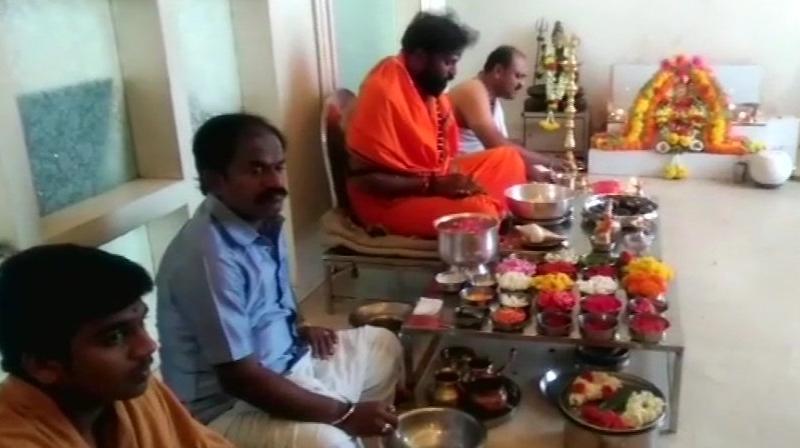 Bengaluru: Fielded against Karnataka Chief Minister Siddaramaiah from Badami seat, BJP's B Sriramulu started the day with a round of prayers.

Counting of votes for the assembly election has started. In pictures early on Tuesday morning, Sriramulu is seen sitting in a prayer room, clad in saffron, an elaborate assortment of flowers and other offerings before him.

Like Siddaramaiah, Sriramulu is contesting from a second constituency Molakalmuru near Bellary. But the BJP's hopes of defeating the Chief Minister rest on Sriramulu and he was among the few candidates who were given a chopper to hop constituencies during the election campaign.

On Saturday, the day of election, Sriramulu was photographed while performing "gau pooja (cow worship)" before casting his vote. That ritual concluded his pooja session today as well.

The 46-year-old -- known to be extremely close to mining baron Reddy brothers and one of most prominent candidates in this election -- has been eyeing the post of Yeddyurappa's deputy if the party comes to power in Karnataka.

Sriramulu's prospective boss, BS Yeddyurappa, has already announced a detailed itinerary that includes the date for his oath ceremony. He has claimed the BJP will win 125-130 seats.

With barely two days left for Karnataka polls, the Congress had released a video, claiming it shows Sriramulu negotiating a bribe with the son-in-law of a former Supreme Court judge for a favourable verdict in an illegal mining case involving the Reddy brothers. The BJP has dismissed it as a fake.