Police have banned celebrations and bursting of crackers around 38 counting centres; additional forces have been deployed. 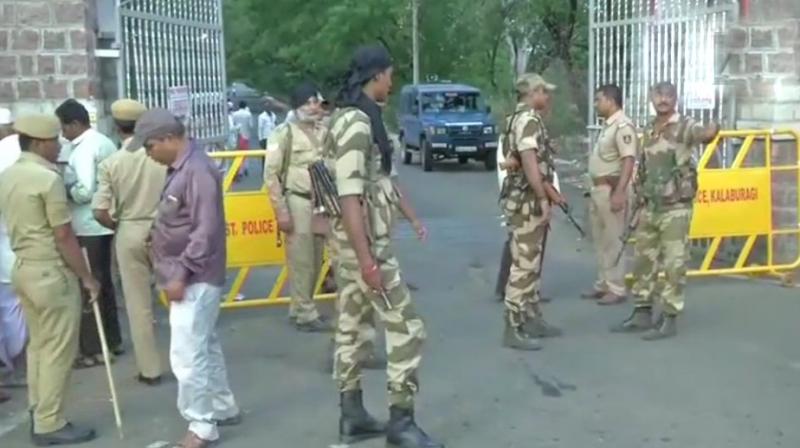 A thick blanket of security has been put in place across Karnataka to ensure a free and fair counting of votes. (Photo: ANI/Twitter)

Bengaluru: The counting of votes and the results of 222 of 224 constituencies of Karnataka Assembly election will be declared today. The counting began at 8 in the morning.

A thick blanket of security has been put in place across Karnataka to ensure a free and fair counting of votes.

"We have deployed Central Armed Police Forces(CAPF) in strong rooms, adequate security personnel presence will be there at all counting centres to ensure law and order is maintained," OP Rawat, Chief Election Commissioner said.

Polling was held in Karnataka on May 12.

The police have banned celebrations, processions and bursting of crackers around the 38 counting centres in the state and deployed additional forces in the area around those centres.

An elaborate three-layer security arrangement has been planned, around the five counting centres in the capital city of Bengaluru.

The situation around the centre is said to be under control; however, the election-governing body, earlier, noted that a marginal percentage of Electronic Voting Machine (EVM) and Voter Verified Paper Audit Trail (VVPAT) failures has been reported.

On Saturday, polling took place in 222 out of 224 assembly constituencies spread across 58,546 polling stations.

Elections in two constituencies, Jayanagar and Rajarajeshwari Nagar, both in Bengaluru District, were postponed earlier.

A total of 2,654 candidates, including 216 women candidates, are in the fray for the election, which is being looked at as a game changer for the Congress ahead of the general elections in 2019, and as a gateway into the South for the Bharatiya Janata Party (BJP).

The Karnataka Assembly has 224 seats and a party or an alliance needs 112-seats to stake a claim to form the government.

Mixed predictions by exit polls have further increased curiosity about the results. Some have said the Congress led by its chief ministerial Siddaramaiah, will emerge as the single largest party, while the others have shown the BJP with maximum seats.

Otherwise, most exit polls have predicted that former prime minister HD Deve Gowda led-Janata Dal (Secular) will emerge as a kingmaker post results, as no party has been shown to reach the majority mark.