Fate of the key players - Siddaramaiah, Yeddyurappa, Kumaraswamy, will be known today as counting of votes is underway in Karnataka. 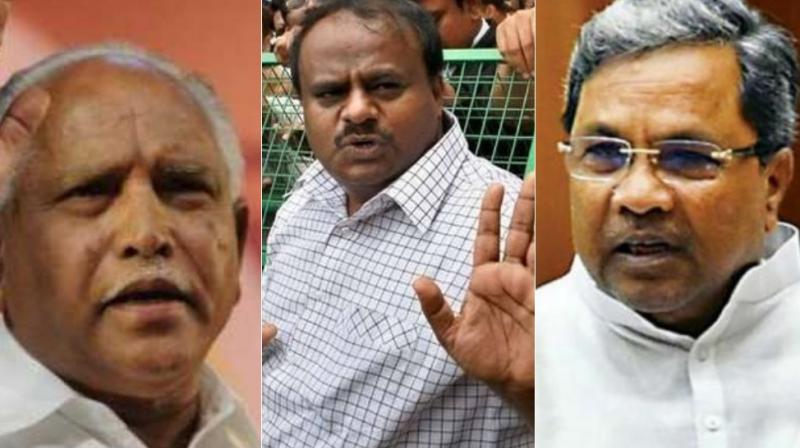 Fate of Yeddyurappa, HD Kumaraswamy and Siddaramaiah will be known today as counting of votes is underway in Karnataka. (Photo: PTI)

New Delhi: After months of hectic campaigning and back-and-forth jibes between the Congress Party, the Bharatiya Janata Party (BJP) and the Janata Dal (Secular) (JD-S), the fate of the key players like Siddaramaiah, BS Yeddyurappa and HD Kumaraswamy, will be known on Tuesday as counting of votes is underway in Karnataka.

On Saturday, 72.13 per cent of the 4.94-crore strong electorate exercised their franchise to decide the fates of 2,654 candidates, contesting for 222 seats out of 224 assembly constituencies.

Hosakote assembly constituency in Bengaluru Rural recorded the highest polling percentage with 89.97 percent, while Dasarahalli seat in Bengaluru Urban had the lowest voter turnout, with only 48.03 per cent of voters casting their vote.

Incumbent Chief Minister Siddaramaiah, who has been leading the Congress campaign by travelling extensively across the state, is highly confident about his party's potential to retain the state by a huge majority.

The Karnataka chief minister is contesting from two seats - Chamundeshwari and Badami, which saw good voter turnouts of above 70 per cent, according to the Election Commission (EC).

Banking on his party's five-year development plan and "Kannada identity", Siddaramaiah announced that this would be his last election and said he was ready to give up his seat for a Dalit leader.

He would be hoping that his people would put faith in him and win the election to secure another five-year term, as well dealing a blow to the BJP's national expanding ambitions.

His son, Yathindra, who fought from the Varuna constituency, a seat from which his father had contested since 2008, saw a voter turnout surge above 75 per cent.

In Jewargi, former Karnataka chief minister N Dharam Singh's son Ajay Singh is contesting on a Congress ticket. A voter turnout of over 65 per cent was recorded in the constituency.

Similarly, Congress supremo Malikarjun Kharge's son Priyank Kharge, who is contesting from Chittapur (SC), saw a voter turnout of nearly 60 per cent. Priyank is currently the Minister of State (MoS) for Information Technology (IT) and Tourism in Siddaramaiah's cabinet.

For the BJP, led by star campaigner Prime Minister Narendra Modi, has left no stone unturned by campaigning aggressively in Karnataka, by addressing over ten rallies and is hopeful that it would wrest back power from the Congress after a decade.

Its chief ministerial candidate, Yeddyurappa, who is contesting from the Shikaripura seat for the seventh time, has expressed confidence that his party will win 125 to 130 seats in the 224-member assembly. His constituency too saw a good voter turnout of over 70 per cent. It would be interesting to see whether the high percentage voting by the people translates into valuable votes for Yeddyurappa.

Very popular among the Lingayat community, Yeddyurappa will be hoping to win votes from the 50,000-strong community.

That the former chief minister is contesting the Karnataka polls has not gone down well with the Congress, which claims that the BJP is fielding tainted candidates like Yeddyurappa. It is to be noted that he was credited with helping the BJP to win the Karnataka elections for the first time in 2008.

For JD(S), the third force in the state, led by former Prime Minister HD Deve Gowda and his son, HD Kumaraswamy are optimistic of an electoral win, or to gain enough seats to play a kingmaker's role in the event of a fractured mandate. The party has already asserted that it would neither side with the BJP or the Congress.

The JD(S) is looking to establish itself once again in Karnataka politics and is expected to give a tough fight to both the BJP and the Congress.

Like Siddaramaiah, Kumaraswamy contested from the Ramanagaram and Channapatna constituencies respectively. The decision by the JD(S) leader to contest from these two seats in Ramanagaram district is seen as an opportunity for the party to return to the centre stage of Karnataka politics. Both the two constituencies saw a brisk voter turnout of about 70 per cent respectively.

Another seat to watch out would be the Koratagere seat, contested by Karnataka State Congress President G. Parameshwara. Contesting for the third time, Parameshwara belongs to a prominent Dalit family.

He was the home minister under Siddaramaiah's cabinet from 2015 to 2017, when he resigned to take over the party's campaigning for the election. For those unversed, Parameshwara lost his seat to the JD(S) in 2013. Winning the seat in this year's election will be a litmus test for him for being considered a potential chief ministerial candidate.

Another key electoral battle that will be keenly watched will be the B.T.M Layout seat in Bengaluru. Two-time MLA and Home Minister of Karnataka R Ramalinga Reddy is pitted against Lallesh Reddy, the nephew of the tainted Reddy brothers.

Reddy claimed that polling at a booth in the B.T.M Layout constituency was rigged by the state government officials.

While talking to news agency ANI, he said that few men who claimed to be officials of Bruhat Bengaluru Mahanagara Palike (BBMP) first gave voter identity cards to the people and collected it back when those people returned after casting their votes.

Other prominent players from the BJP to watch out are B Sriramulu and G Karunakara Reddy, the eldest of the mining baron Reddy brothers from Bellary.

Sriramulu was pitted against Siddaramaiah in Badami. He also contested from Molakalmuru, which is a Congress bastion. He is considered to be close to the Reddy brothers, who face allegations of illegal mining and corruption.

On a related note, the Karnataka Assembly has 224 seats and a party or an alliance needs 112 seats to form the government.

The elections in remaining two constituencies, Jayanagar and Rajarajeshwari Nagar, has been postponed.

In Jayanagar, the polling has been deferred due to the death of a BJP candidate, BN Vijayakumar on May 4. The dates have not been announced yet by the EC.

In Rajarajeshwari Nagar, it has been postponed due to fake voter-ID row. The polls in RR Nagar will now be held on May 28 and the results will be out by May 31.

After the polling, various exit polls have predicted either a win for the Congress or the BJP or a possibility of a hung assembly.