Exit polls had predicted a fractured verdict, underlining the importance of the JD(S) in such a scenario. 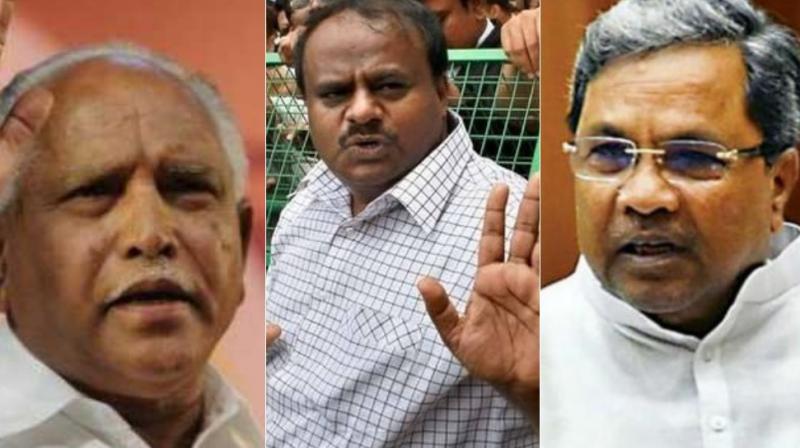 Karnataka is the only southern state the BJP has ruled before it ceded power to the Congress last term. (Photo: PTI)

Bengaluru: The Bharatiya Janata Party emerged as the single-largest party in Karnataka but fell short of a simple majority on Tuesday, prompting the Congress to immediately stitch together a post-poll alliance with the JD(S) to make a bid for the government.

The Election Commission put BJP's score at 104, eight short of the simple majority required of 112. Congress managed 78, while the JD(S) got 37 seats.

The Congress reached out to the JD(S) -- offering to support it from outside -- as soon as it became clear the BJP would not be able to form government on its own. The JD(S) was happy to have that support, it is learnt, particularly if the chief minister's chair was given to the party.

By early evening, both the BJP and the newly-minted friends Congress-JD(S) made a mad dash for Raj Bhavan to stake claim on the government.

The JD(S)' last outing with the Congress, however, had ended in betrayal.

When the 2004 Assembly elections returned a fractured mandate, JD(S) joined the Congress to form government, which was led by Congress’ Dharam Singh. Within two years, JD(S) chief Deve Gowda’s son H D Kumaraswamy split the party, toppled the Dharam Singh-led government and become chief minister of a coalition with the BJP.

The idea was to be in the chief minister’s post for 20 months and then hand it over to Yeddyurappa for the next 20.

But when time came to get up from the seat, both Kumaraswamy and Deve Gowda sat tight, leading to President’s rule. The Governor had invited Yeddyurappa to form the next government.

Kumaraswamy, of course, supported the government, and saw it through till the end of term.

ounting was on in 222 constituencies of the 224-seat Assembly. Voting was not held in two seats. Any party that touches 112 will get the clean majority to form government.

Exit polls had predicted a tight race between the two main rivals — BJP and Congress — in the Karnataka Assembly elections with the JD(S) emerging as a likely kingmaker.

The Congress’ presence in the country has drastically shrunk since the BJP decisively won the general elections in 2014. Ever since, it has ousted the Congress in a dozen states, and now looks set to deal a crushing defeat to the incumbent party in one of its last bastions – Karnataka.

The Congress now rules three states – Punjab, Mizoram and Puducherry. Karnataka will be some consolation if the Congress can swing the deal with the JD(S).

In the outgoing Assembly in Karnataka, Congress had 122 seats, the BJP and JD(S) 40 each and independents and smaller parties 22.

The BJP, on the other hand, has improved vote and seat share since 2013. The Prime Minister’s decision to waive farm loans have gone down well with farmers as the party did well in the rural belt. It also came out trumps in the coastal belt, central and Mumbai Karnataka.

The JD(S) retained the Mysuru belt, and may become the king rather than the kingmaker if the deal with the Congress comes through.