BJP's Karnataka victory decoded and why Congress lost the plot

Siddaramaiah-led Congress ran a campaign based on Bihari versus Bahari model of Nitish Kumar of Bihar, but failed. 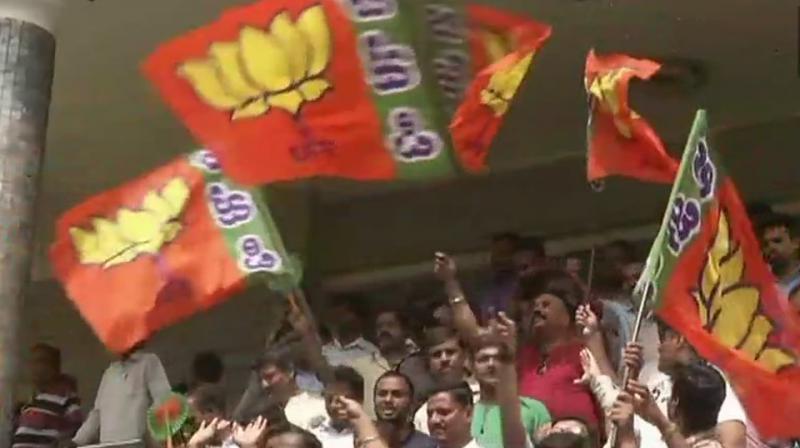 BJP has proved an overwhelming number of opinion and exit polls wrong in the Karnataka Assembly election result. (Photo: ANI/Twitter)

The failure of AHIND castes-combo, split between Congress and JD(S), Big Data driven Whatsapp campaign and the failure of Congress to mainstream Reddy brothers' corruption in election debates have led to the Congress debacle in Karnataka.

By mid-morning of May 15, it was evident that the BJP would either emerge the single largest party or be the majority winner in Karnataka. An hour later, it was BJP all the way proving an overwhelming number of opinion and exit polls wrong.

Why these results in Karnataka?

It is significant to note the BJP fought under the local leadership of Yeddyurappa (Yeddy) who had to resign amid corruption charges as chief minister last time. BJP has also given 8 seats to the infamous Reddy Brothers of Bellary, whose associate, B Sriramulu, is expected to play a major role in the ensuing BJP state government. The success of BJP in this context proves that corruption was a non-issue in the polls. Association of Democratic Rights says that 37 per cent of BJP candidates have criminal cases, with 27 per cent having serious cases like murders and rapes, while the corresponding figures are 25 per cent and 14 per cent for Congress. However, 94 per cent of Congress candidates were crorepatis while 93 per cent of BJP candidates were the same.

It is further significant to note that Congress Chief Minister Siddaramaiah's welfare measures could not cut much ice on the face of caste and communal politics. As growth has increased in this millennium, governments flush with funds have begun implementing several welfare schemes, which are often described by critics as populist policies. Siddaramaiah resorted to many such measures ensuring food-grains and cooked food for BPL families supporting more than a crore people of the state, an effort that does not seem to have translated into votes.

Siddaramaiah-led Congress ran a campaign based on Bihari versus Bahari model of Nitish Kumar of Bihar, but failed. Siddaramaiah tried to capitalise on slogans like 'BJP is a North Indian party' or 'affluent South Indian states are funding regressive North Indian states' after this issue came up in the last Finance Commission meeting. From playing the Lingayat card, caste votebanks, rooting for separate state flag, and leading a tirade against Hindi, Siddaramaiah tried all tricks and failed.

It is also significant to note that Congress CM Siddaramaiah reposed faith in his AHIND formula of uniting Muslims, Dalits and tribals who together account for 39 per cent of the electorate. But the combination seems to have got split between the Congress and JDS-BSP combine as their constituencies are similar. Siddaramaiah's overtures to the Lingayat community by agreeing to a minority status has not also yielded much results as the Lingayat BJP leader Yeddyurappa could hold on to his Lingayat vote-base while JDS leader Deve Gowda and sons held on to their Vokkaliga vote-base. Thus, Congress lost out on all mass vote counts.

The Vokkaliga-Dalit combo has worked for JD (S). Although Karnataka has witnessed a triangular contest at the macro level, the contest at the ground level is more or less between the Congress on one side and the BJP or the JD (S) on the other. This is due to the social and geographical distribution of the political influence of the BJP and JD (S). The BJP is popular in north and central Karnataka while the JD (S) is strong in the Old Mysuru region and southern Karnataka. While BJP enjoys the support of Lingayats despite Siddaramaiah wielding the separate religious identity card, the JD (S) rallied the Vokkaliga community voters. Thus, the BJP and JD (S) are not competitors in the political and electoral arena of the state. There seems to be an undeclared understanding between the BJP and JD (S). The BJP reportedly fielded weak candidates wherever the JD (S) had winning chances against the Congress, numbering at least 40+. The JD (S) reciprocated with a similar choice of candidates in some 55+ seats where BJP was strong from the start.

Mamata Banerjee, West Bengal CM, rightly commented that had Congress and the JD(S)-BSP fought together, it would have been a spectacular victory of the alliance. Only a united opposition can combat an aggressive BJP riding the Hindutva bandwagon.

In this election in Karnataka, at any rate, the marriage of politics and big data has finally happened, not surprisingly in the tech hub of India, Bengaluru. The first election in which the whole of the hi-tech armoury was deployed is the one that just ended, and by all the three major parties. This was also the first election in India after the Cambridge Analytica fracas hit the headlines. To simplify the Big Data approach, if a party (or a candidate) has a good idea of the political views and likes/dislikes of as many voters as possible, it can use this information to fine-tune its own outreach to voters and influence their votes, and a new ploy like this can indeed decide the outcome when elections are won and lost over a margin of a few thousand votes.

This was arguably also the costliest election of its kind in India so far. Money and muscle power are now replaced by money and data power – at least in our own Silicon Valley. In place of social engineering, it is time for social media engineering. The Karnataka election marks a complete transformation of Indian politics. Karnataka was stinking with cash in this no-holds-barred battle.

Going further, forget debates and rallies. Elections in India are now fought and won on WhatsApp, the Facebook-owned messaging app that is used by millions of people to make calls, chat and share information.

It is also providing an unfiltered platform for fake news and religious hatred, activists and observers say.

In a high-profile state election here this month, seen as a preview of India's national election next year, the country's two major political parties claimed they each amassed more than 20,000 WhatsApp groups, boasting they could reach more than 1.5 million loyalists in minutes. But some of those messages have been false and inflammatory, twisting the words of political opponents and ratcheting up tension between communities.

Concerns for the Long Run:

Karnataka marks the beginning of a new trend in politics – the tendency to treat voters like robots who respond to a software program through remote control. Voters, in this scheme of things, are reduced to puppets on strings. Armed with all the relevant information about him or her, geeks were out to manipulate their behaviour. In any case, voters’ intelligence may not be a match for artificial intelligence backed by the razzmatazz of the money power. Pushed out of the agenda were all the issues that mattered to the citizens, like corruption, welfare measures, peace, infrastructure, farmers' woes, etc.

Democracy in its content may remain intact but it will be flagrantly violated in spirit if these trends continue. That is the essence of the Karnataka election.

(Opinion expressed in this article is that of the author’s. The writer is currently the School Head, School of Media, Pearl Academy, Delhi and  Mumbai.)