Shah had undertaken a similar exercise last year also to check the party’s organisational strength in each state. 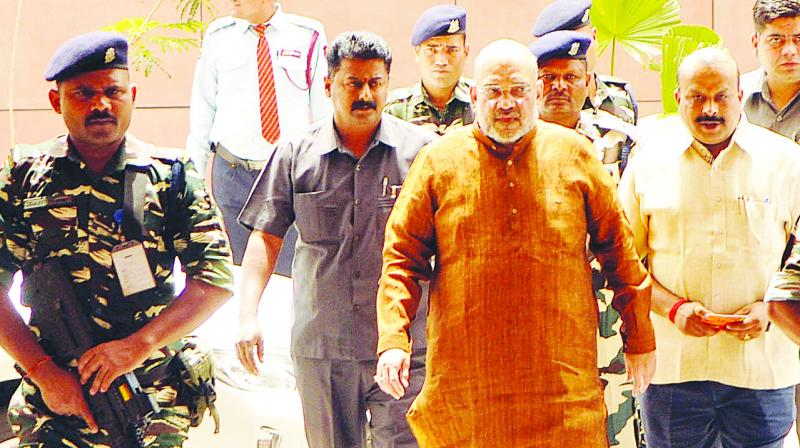 BJP president Amit Shah arrives for a meeting at the party headquarters in New Delhi on Monday. (Photo: Pritam Bandyopadhyay)

New Delhi: Sounding the poll bugle for the 2019 electoral battle, the BJP on Monday said it has accepted the challenge of a combined Opposition versus it. Exuding confidence that the party’s strength and number will increase in the next Lok Sabha elections, BJP president Amit Shah told party leaders that people support the party because it has the leadership of Prime Minister Narendra Modi and organisational strength. Meanwhile, Mr Shah, who held a meeting  of party’s national office bearers and state unit chiefs on the eve of Karnataka poll result, will be embarking again on a nationwide tour to visit party’s state units. Mr Shah had undertaken a similar exercise last year also to check the party’s organisational strength in each state. The BJP president is likely to embark on this second tour by next month and will also be interacting with party workers till the ward level of districts. After this meeting, national office bearers of party’s various morchas are scheduled to meet Mr Modi on May 17.

Sources disclosed that Mr Shah told party leaders that Modi government’s people centric schemes have benefitted nearly 50 crore people, through schemes like Ujjwala, Jandhan, Mudra, Swachchh Bharat, Skill India, rural electrification and these beneficiaries could boost the party’s existing votebase. With the party facing opposition flak for being “anti-dalit,” Mr Shah told leaders to reach out these communities, who seem to prefer regional outfits than the national parties. Mr Shah, it was learnt, told the party leaders that the BJP got nearly 17 crore votes during last Lok Sabha elections when 7.5 crore votes could decide the fate of any party.

After the meeting, BJP national spokesperson Shahnawaz Hussain said in his address Mr Shah gave credit to party’s organisational stregnth that it is ruling 14 states on its own. Mr Shah said even other political outfits, in particular Congress, have now started “copying” it when their own organisation have been ruined due to their arrogance.

Mr Shah told party workers that the BJP will break the Oppositions’ created myth that it won the 2014 Lok sabha polls “in a fluke” and will prove that the it not only knows how to run a better government but also knows to remain in power due to its good work. He asked cadre to toil untill non-BJP states like Odisha and West Bengal comes to party’s kitty.