India   Politics  15 Apr 2017  Will have CM in every state: Amit Shah at BJP's executive meet in Odisha
India, Politics

Will have CM in every state: Amit Shah at BJP's executive meet in Odisha

Several party leaders, including Amit Shah will attend the 2-day meeting which begins on Saturday. 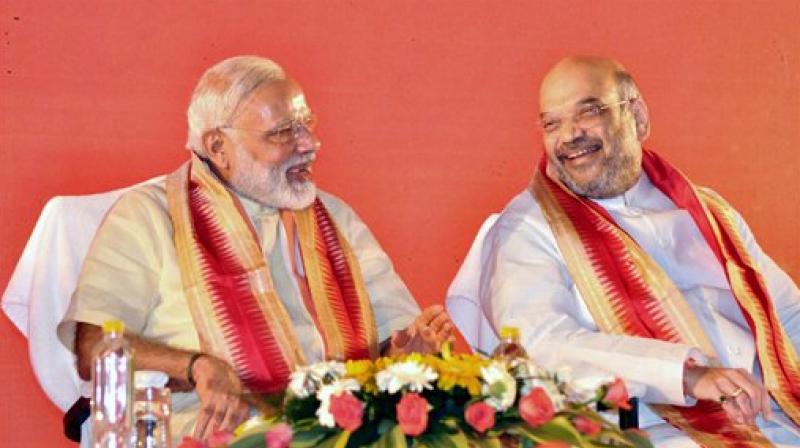 Bhubaneshwar: BJP President Amit Shah, at the 2-day-long Bharatiya Janata Party's national executive meet in Bhubaneswar on Saturday condemned attacks on BJP workers across India and said BJP is yet to reach its peak. He added, one day, the party will have a CM in every state.

Prime Minister Narendra Modi also arrived at Bhubaneshwar for the BJP's national executive meeting that is scheduled to begin on Saturday.

All 13 BJP chief ministers, including Uttar Pradesh’s Yogi Adityanath, their deputies and 45 Union ministers also attended the meet to prepare a roadmap for the Assembly and Lok Sabha elections in 2019.

The leaders discussed the BJP’s strategy to increase the party’s political footprint ahead of the 2019 general elections, while eyeing the 2019 Odisha state elections.

Modi was welcomed by senior party leaders, state Chief Secretary AP Padhi and Director General of Police KB Singh on behalf of the Odisha government, before he embarked on his 9 km roadshow.

He also paid floral tributes to the freedom fighters on his way to the Raj Bhavan. Chants of 'Modi, Modi' and Bande Marataram echoed through out the Prime Minster's journey.

After a 20-minute halt at Raj Bhavan, Modi resumed his roadshow. He got off the vehicle and walked for about half-a-km near Jaidev Vihar, mingling freely with the people before arriving at Janata Maidan.

Modi reached the venue after his road show and was welcomed by BJP national president Amit Shah at the Janata Maidan.

Speaking of political violence, BJP President Amit Shah said, BJP and RSS workers are being attacked in Tripura, Kerala and West Bengal. According to a Hindustan Times report, he added, "These attacks will be opposed peacefully, lotus will bloom."

“Where on one end, there are states where BJP is setting examples of development, on the other, 86% of people of Odisha are devoid of clean drinking water and 41% are away from electricity,” said Shah.

“All the struggle and hard work of the BJP Odisha workers would be realised as BJP will form the Government in the coming election,” he added.

Shah also said that BJP is yet to reach its peak, saying that the party should have a chief minister in every state.

Hailing Amit Shah’s comment on EVM, Union Minister Ravi Shankar Prasad said “President Shah said we expected political parties to accept defeat honestly but they are making excuses and one of those excuses is EVMs. President Amit Shah also said that saying such things (blaming EVMs) is equivalent to insult of Election Commission.”