Empty vessels make the most noise: Parrikar on Pakistan

His comments come against the backdrop of the death sentence given by a Pakistani military court to Kulbhushan Jadhav. 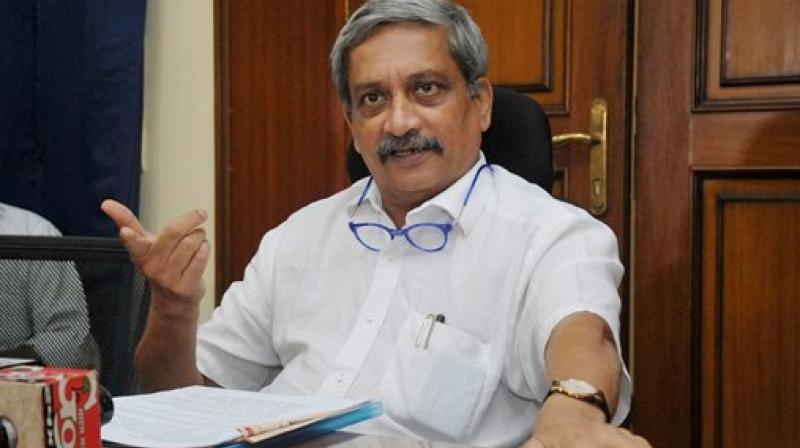 Panaji: Former Defence Minister Manohar Parrikar on Saturday dismissed Pakistan as an empty vessel making noise and said the neighbouring country is up to something or the other, to remained engaged.

His comments come against the backdrop of the death sentence given by a Pakistani military court to Kulbhushan Jadhav, a former Indian Navy official.

"There is a proverb in Konkani, and Hindi as well which means empty vessels make the most noise. We should not take much note of what they (Pakistan) say," Parrikar said during an interview to DD News responding to a question on Pakistan.

"Pakistan wants some or other reason to remain engaged. It is playing a dangerous game. It should understand that if India starts retaliating, then Pakistan does not have the power to fight back, whatever they may project themselves as."

"But we (India) want peace, we don't want provocation, because of which they should give back Jadhav. First of all he has been abducted. He was not in Pakistan. He was in ran. Iran has said that Taliban kidnapped him and took him to Pakistan. Pakistan has a habit of doing something or other," the BJP leader said.

"About Jadhav, I can only say that, for what Pakistan is going to do...for that Sushma Swaraj (External Affairs minister) has given an apt reply. We will not keep quiet. Country will do what is required to do. We can take care of Pakistan if it tries to do anything ill-advised," he said.

"They were talking of nuclear power usage which they have stopped after surgical strikes. I hope they have understood that they cannot blackmail us as India has the power to counter them," he added.

The ex-Defence minister who is now back in Goa as the Chief Minister after the recent assembly polls, said India achieved many things under the leadership of PM Narendra Modi.

Referring to relations with neighbouring countries like Pakistan and China, Parrikar said, "There was soft diplomacy and also there was use of hard power. This has happened for the first time."

Parrikar said during his tenure as Defence Minister, several measures were adopted to increase the military strength of the country.

"I can say that we were able to bring potency to the potential of the Armed forces. If you see the CAG report of 2013 they have pointed out that 121 type of ammunition had stock of less than ten days. Now I can say that number has been reduced to 20-22. In next one or two years, it will be almost zero," he said.

"Finally, Army works on ammunition. If anyone asks me what was the gap in capability on the parameter of 100 and how much have you reduced it, I can say I have reduced it up to 75-80," he said.

"Some things have already been acquired and some are ordered and will be arriving in next one year," Parrikar said.

"I transferred all my revenue power to the Armed forces and asked them to bridge the gap in building the capability. When I left, the Armed forces had completed deals worth Rs 25,000-30,000 crore that too in eight per cent less cost. We saved Rs 22,000 crore through that. This is because we took quick decisions," he stated.