The party said PM Modi has decided to make Odisha the laboratory of welfare schemes for the poor. 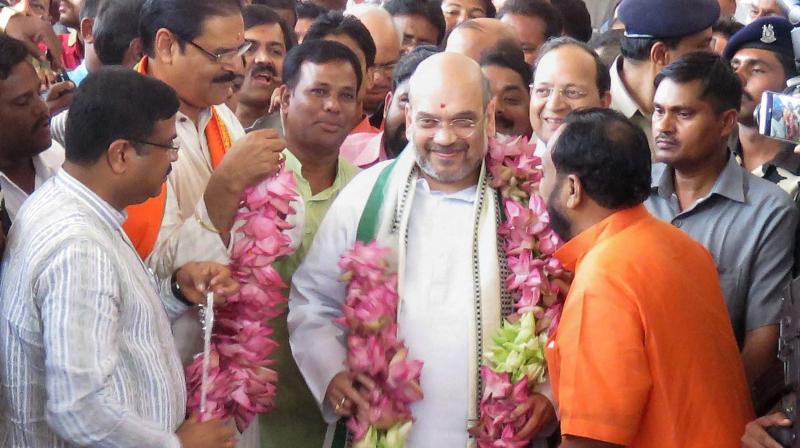 Bhubaneswar: BJP president Amit Shah reached Bhubaneswar to a grand welcome on Friday as the party sets its eyes on the coastal state ahead of 2019, starting with a two-day national executive meet over the weekend.

Prime Minister Narendra Modi will reach the state on Saturday. All 13 BJP chief ministers, including Uttar Pradesh’s Yogi Adityanath, their deputies, 45 Union ministers and senior BJP leaders will also attend the meet to prepare a roadmap for the Assembly and Lok Sabha elections in 2019.

On his arrival, Mr Shah was offered two lotus garlands — one with 21 flowers representing the total Lok Sabha seats in the state and another with 147, marking the Assembly seats. The BJP is holding its national executive meeting in the temple city after a gap of 20 years. “The state leadership in a manner requested Shah to help it in winning all the 21 Lok Sabha and 147 Assembly seats in the state,” said a senior leader. The party has only one Lok Sabha seat in the state and 10 in the Assembly.

Later in the evening, Mr Shah interacted with party general secretaries and other senior office-bearers and chalked out the agenda for the two-day event.

For 2019, the BJP is eyeing at least 150 Lok Sabha seats from states like Odisha, Andhra Pradesh, West Bengal, Tripura, Kerala and Tamil Nadu.

Besides making plans for expansion in other states, the meet would also deliberate on capturing power in Odisha where it has shown steady growth in recent times. In the recent panchayat polls, the party finished second, pushing the Congress to the third spot.

The BJP named the venue of its national executive meeting after dalit poet Bhima Bhoi apparently to woo dalits who comprise over 17 per cent of Odisha’s population.

The party said PM Modi has decided to make Odisha the laboratory of welfare schemes for the poor.

Union minister Dharmendra Pradhan said, “While PM Modi’s acceptability has increased in Odisha, people are annoyed with the ruling BJD. People have changed their mind as they voted in favour of the BJP in large numbers during the panchayat elections.”