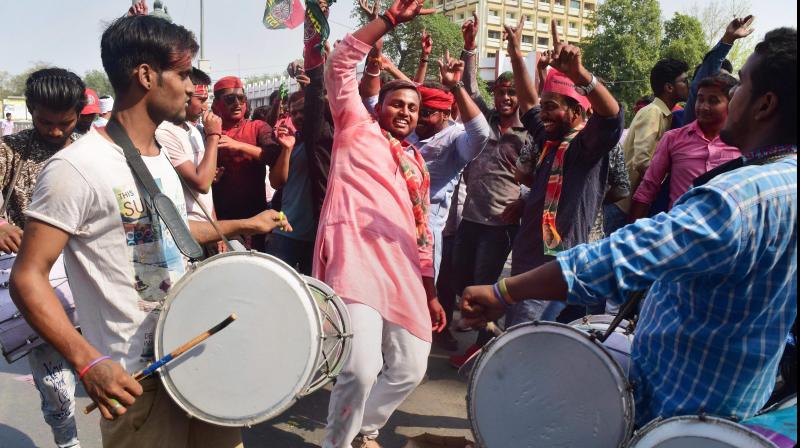 New Delhi: The saffron poll managers failed to gauge the impact of the SP-BSP arrangement, which jolted the BJP in the prestigious Lok Sabha constituencies of Phulpur and Gorakhpur in Uttar Pradesh, whose bypoll results were declared Wednesday. The BJP’s poll managers are also rattled by BSP supremo Mayawati’s strategy of transferring her party’s votes to SP candidates. Till now, the SP and BSP were considered arch-rivals in state politics.

The BJP top brass is expected to review the poll defeats, specially the one in Gorakhpur, that is seen as a rejection of its Hindutva plank as the result was seen as a “semi-final” ahead of next year’s general election. The results have also boosted the Opposition’s efforts to put up a united front against it in 2019. UP chief minister Yogi Adityanath accepted defeat and conceded that the last-minute SP-BSP alliance had worked against his party in the bypolls.

The saffron leadership, that was rejoicing over having demolished the Left citadel of Tripura, was in for a rude shock on Wednesday when the BJP candidate lost the key Gorakhpur parliamentary seat. Senior Yogi Cabinet minister Siddharth Nath Singh admitted: “We had not seen the SP and BSP coming together, but   since we have come to know of this now... Though there is still a long time (ahead of the polls), we will redraw our strategy keeping this factor in mind.” He stressed that those who wanted development were still with the saffron party. These bypolls results have come at a time when the BJP was celebrating its first year of power in UP.

Both the seats saw a consolidation of OBC, dalit and Muslim votes. The poll results also raised the quesion of how much the saffron cadre worked this time as the voting percentages in both seats were significantly lower compared to last time. Gorakhpur saw voting of 47.45 per cent, compared to 54.64 per cent last time. Similarly, in Phulpur, it was 37.39 per cent this time, compared to 50.20 per cent earlier.

The BJP also feels that only attacking the SP during the campaign was a miscalculation as the BSP also played a crucial role in the BJP’s defeat. There is also a view in the saffron camp that if the SP and BSP stitch up an alliance in 2019, it will massively dent the BJP’s poll prospects of continuing in power after the next general election.

While the BJP had won Phulpur only in 2014, losing Gorakhpur was a rude shock to the BJP, which had held this prestigious constituency, which has the famous Gorakhdham Matth, since 1991. The parliamentary seat has been won by representative of this matth — Mahant Avaidyanath and then Yogi Adityanath. After the defeat, voices started growing in the state unit about “possible internal sabotage” and wrong selection of candidates.

BJP spokesman G.V.L. Narasimha Rao claimed that voters seem to want to bring some amount of “political equilibrium” by giving encouragement to the defeated parties as the saffron party has been winning Assembly elections. He noted that the BJP has lost in bypolls held earlier as well, but continues to win Assembly elections.

“In a general election people vote to elect a government and the BJP has always been the favourite as people want a guarantee of good governance, which Prime Minister Narendra Modi has brought in politics. Bypolls have no impact on the stability of a government, whether at the Centre or in a state,” he said.

Deputy chief minister Keshav Prasad Maurya said the reasons for the unsatisfactory performance would be reviewed and stocktaking of the social and other factors that came into play in these polls would be done.

“The BJP had won the Phulpur seat for the first time in 2014 but Gorakhpur has been with the party since long... We will have to see where the social factors went against us or where workers did not work as hard as expected of them,” Mr Maurya said.