NPP's Y Joykumar was sworn in as Deputy Chief Minister of Manipur. Notably, this is the first BJP-led government in Manipur. 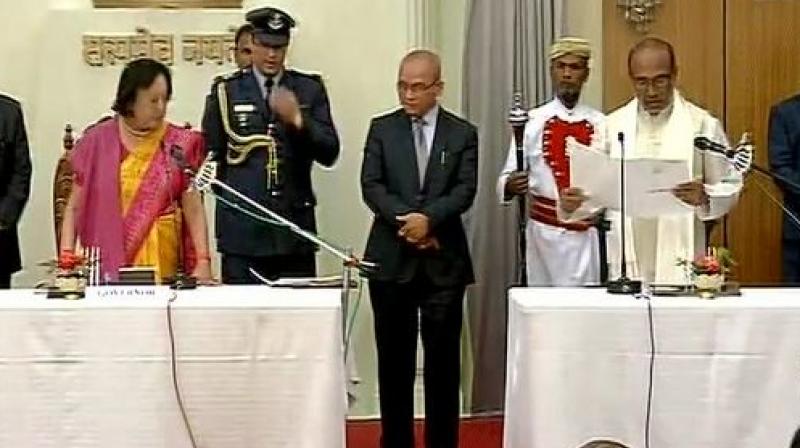 Imphal: Amid charges of horse-trading and speculation about a possible split in the Congress Party in the state, the first Bharatiya Janata Party-led government in Manipur was sworn in on Wednesday after Nongthombam Biren Singh took oath as the Chief Minister of Manipur.

National People's Party's Y Joykumar was sworn in as the Deputy Chief Minister of Manipur. The oath was administered by Manipur Governor Najma Heptullah.

The BJP had won 21 seats in Manipur, seven less than the Congress, but the party got the support of the National Peoples’ Party and the Naga People’s Front, both of which won four seats each, in the just-ended Assembly elections. The BJP also has the support of the Lok Janshakti Party’s single MLA.

However, the new government will have to prove its majority through a floor test which will be held soon.

The BJP’s strength rose to 33 in the 60-member state Assembly on Monday when a Congress MLA, Shyam Kumar from Andro, met the governor and lent support to the BJP-led alliance.

Furthermore, BJP sources in Imphal had claimed at least six more Congress MLAs were ready to switch over to the saffron party, and said that there was visible resentment in the Congress against former chief minister Ibobi Singh, who continues to be in the forefront of party affairs in the state.

However, the Congress, as the single largest party, had also staked its claim to form the government. Outgoing Congress CM Okram Ibobi Singh, who submitted his resignation on Monday, had earlier urged governor Najma Heptulla to accept his claim to head the next government in Manipur on the basis of a letter of support from the four-member NPP.

Meanwhile, NPP leader Conrad Sangma had denied that he had written or signed any letter supporting the Congress Party.

A national football player-turned journalist-turned-politician, 56-year-old Biren Singh began his political career in 2002, when he was elected to the 8th Manipur Legislative Assembly. He was elected from his home constituency, Heingang, as a Democratic Revolutionary Peoples Party candidate.

Singh made his debut as a minister in the state in 2003 when was appointed minister of state for vigilance.

He later became vice-president of Manipur Pradesh Congress Committee after he led a subtle dissidence against Ibobi five years ago and asked for a leadership change in the state.