Anil Vij went on to say that Mahatma Gandhi’s image would be removed gradually from currency notes as well. 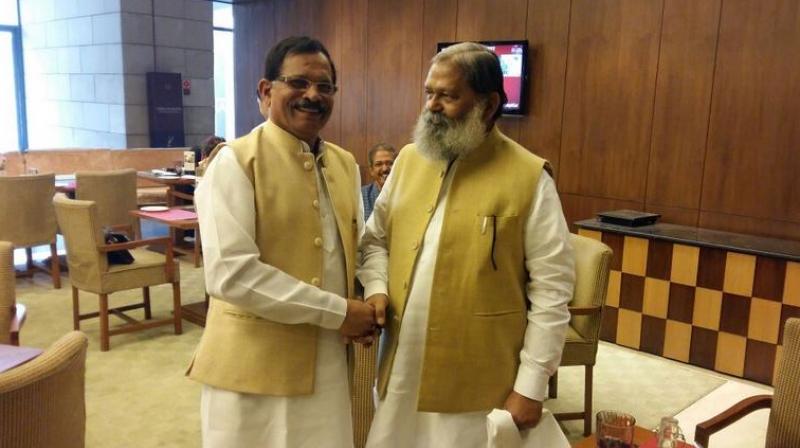 New Delhi: Haryana minister Anil Vij said on Saturday that Mahatma Gandhi’s image had not helped khadi and had caused devaluation of the currency, sparking widespread outrage with even his party BJP condemning the remarks, forcing him to withdraw them.

The five-time MLA from Ambala Cantt, who has made controversial remarks in the past as well, also said that it was good that Mahatma Gandhi’s image has been replaced with that of Narendra Modi in the calendars and diaries of Khadi and Village Industries Commission (KVIC) as the PM is a “better brand”. He went on to say that Mahatma Gandhi’s image would be removed gradually from currency notes as well.

The senior BJP leader said, “Gandhiji’s name has no patent on khadi. Since his name has been attached with khadi, it has only gone down. When his image was put on notes, the currency also got devalued.”

On being asked why the BJP government at the Centre continued with Mahatma Gandhi’s image on the new currency notes introduced after demonetisation, he said, “It will also go gradually.”

Taking to Twitter Congress vice-president Rahul Gandhi said, “Hitler and Mussolini were also very powerful brands.” Congress spokesperson Randeep Surjewala attacked the Modi government, saying it was doing what the British did. He said, “Subjugate people and institutions and use the power of the state to stifle every dissenting voice, but Modiji, Anil Vij and BJP must remember that you can kill Mahatma Gandhi, remove his photograph, abuse him, but Gandhi has always lived in India’s soul.”

The BJP also condemned the minister’s remarks, and said they were his personal views. BJP’s national secretary Shrikant Sharma said, “The party does not associate itself with his remarks. These are his personal comments. We condemn them.”

He also said that Mahatma Gandhi was an icon for the BJP and the country, and the party held his values in high esteem. Haryana chief minister Manohar Lal Khattar also quickly distanced himself, saying the minister made the remarks in his personal capacity.

Later, Anil Vij tweeted, “The statement given by me in connection with Mahatma Gandhi was given in my personal capacity. To avoid hurting anyone’s sentiments, I am withdrawing it.”

Tushar Gandhi, Mahatma Gandhi’s great-grandson, alleged that it was a “well orchestrated” campaign from the “high command”, and that the minister was speaking the language of the RSS.