Chairman M. Venkaiah Naidu adjourned the House till 12 noon and said both sides should resolve the matter 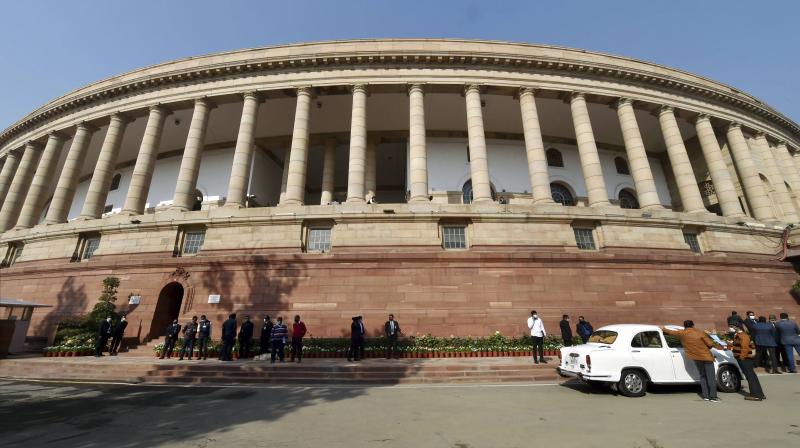 The Parliament has been witnessing protests since November 30, the second day of the Winter Session. (Representational Image/ PTI)

New Delhi: After two days of smooth functioning, the Rajya Sabha was disrupted on Monday. The Zero Hour and the question hour were washed out as opposition members demanded that the suspension of twelve members be revoked.  As the house began on Monday after the customary laying of papers and statements Leader of Opposition Mallikarjun Kharge alleged in the Rajya Sabha that by not considering revoking the suspension of the 12 MPs, the government is forcing the opposition to disrupt the House. He said, "The government is not considering its decision, and as you (chairman) is the custodian of the House, we request that the suspension be revoked. The adamant view of the government is to force the opposition to disrupt the House, so we decide to walk out." Chairman M. Venkaiah Naidu adjourned the House till 12 noon and said both sides should resolve the matter.

As the House convened for the question hour union Commerce Minister and the Leader of the House Piyush Goyal charged the suspended members for not showing any remorse. He even urged the opposition members to not create a ruckus as Monday was a pious day as Kashi Complex was being inaugurated. The opposition members stuck to their demand that the suspensions should be revoked. In the din, the Chair adjourned the proceedings of the house.

The Parliament has been witnessing protests since November 30, the second day of the Winter Session, as 12 members of Rajya Sabha were suspended the day prior by the chair for alleged unruly in the Monsoon Session in August, when marshals were called after Opposition members stormed the Well of the House.

The suspended MPs include Elamrajya sabhaaram Kareem (CPM), Phulo Devi Netam, Chhaya Verma, R Bora, Rajamani Patel, Syed Nasir Hussain and Akhilesh Prasad Singh of the Congress, Binoy Viswam of CPI, Dola Sen and Shanta Chhetri of Trinamool Congress, Priyanka Chaturvedi and Anil Desai of Shiv Sena. Since their suspension, they sit on a Dharna in front of the Gandhi statue in the parliament complex. Several opposition leaders also join them to show solidarity. They will march from Vijay Chowk to Parliament on Tuesday along with many opposition leaders