Mamata Banerjee had said the BJP will not be able to bulldoze the states to enact the new law. 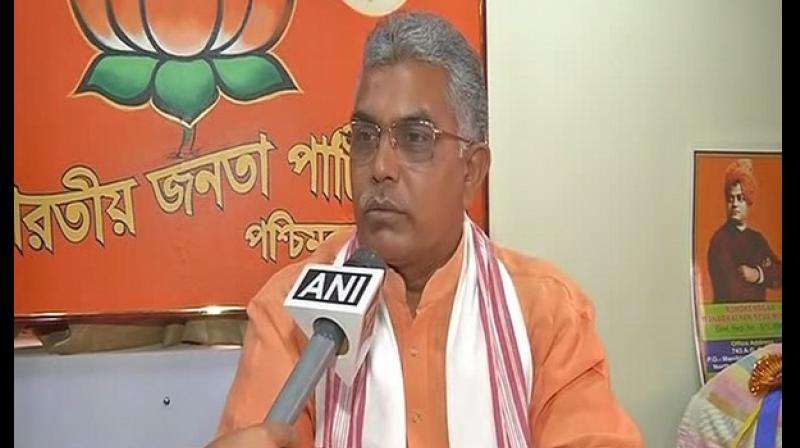 West Bengal BJP chief Dilip Ghosh on Friday said the Citizenship Amendment Act will be implemented in the state and neither Chief Minister Mamata Banerjee nor her party, Trinamool Congress, will be able to stop it. (Photo: File)

Kolkata: West Bengal BJP chief Dilip Ghosh on Friday said the Citizenship Amendment Act will be implemented in the state and neither Chief Minister Mamata Banerjee nor her party, Trinamool Congress, will be able to stop it.

West Bengal will be the first state where the Act will be implemented, he said.

The BJP leader's remarks came after Banerjee, one of the most vocal opponents of the amended Citizenship Act, said at a press conference that she will not allow the new law to be implemented in her state "under any circumstances".

"Earlier she had opposed the abrogation of Article 370, demonetisation, but that didn't stop the Union government from implementing it. In this case too, the new Citizenship Act would be implemented in the state," Ghosh said.

"Bengal, for that matter, would be the first state where it would be implemented," he added.

Ghosh said Banerjee should come clean on why she is opposing it.

"Is it because she is afraid of losing her vote bank in the state? Let us make one thing very clear, the Citizenship Act would be implemented in the state, neither Banerjee nor her party would be able to stop it," he said.

She is bothered about infiltrators but not about Hindu refugees who have been looking forward to this law for the last several decades, he claimed.

Banerjee had said the BJP will not be able to bulldoze the states to enact the new law. The chief minister also announced a series of protests next week, saying she would hit the streets seeking revocation of the "draconian" Act.

"Why is Mamata Banerjee not taking action against the infiltrators who are behind the protests in Bengal? She is instigating masses to take law into their hands. If she is so concerned about the infiltrators, why doesn't she say anything about Hindu refugees," he asked.

Protests demanding immediate revocation of the amended Citizenship Act reached the shores of West Bengal on Friday, with agitators resorting to violence and arson at railway stations and thoroughfares across the state.

According to police sources, people in the minority-dominated districts of rural Howrah, Murshidabad, Birbhum, parts of Burdwan and North Bengal hit the streets this morning, raising slogans against the Prime Minister Narendra Modi-led government.

In Kolkata, hundreds of protesters gathered at the Park Circus seven-point crossing, seeking the revocation of the law. They raised anti-government slogans and burnt tyres on the thoroughfare, leading to traffic congestions in the southern and the central parts of the city.

President Ram Nath Kovind on Thursday night gave his assent to the Citizenship (Amendment) Bill, 2019, turning it into an Act.

According to the amended Act, non-Muslim refugees, who escaped religious persecution in Pakistan, Bangladesh and Afghanistan and moved to India before December 31, 2014, will be granted Indian citizenship.