I'm CM because of your sacrifice: Yediyurappa to K'taka Congress-JDS rebel MLAs

Yediyurappa also requested party men to work for their victory, by stating that 'ensuring their victory is on us, as BJP karyakartas'. 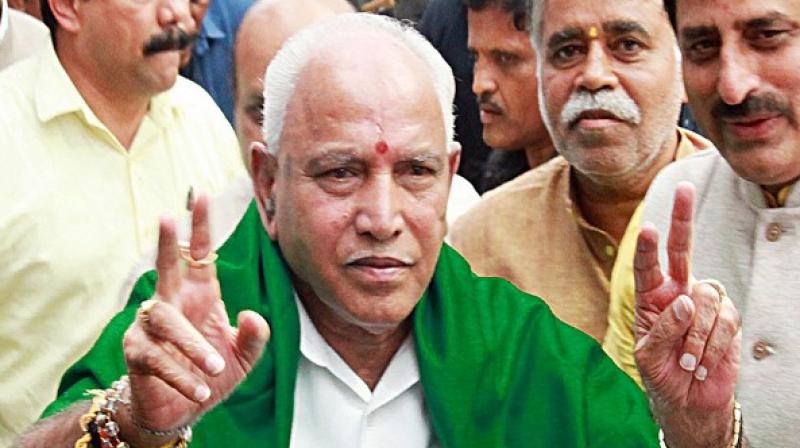 In what is seen as an indication that most of the disqualified legislators who joined BJP on Thursday will be party's candidates for December 5 bypolls, Karnataka Chief Minister B S Yediyurappa called them as "future MLAs and Ministers", as he assured of keeping up the promise made to them. (Photo: File)

Bengaluru: In what is seen as an indication that most of the disqualified legislators who joined BJP on Thursday will be party's candidates for December 5 bypolls, Karnataka Chief Minister B S Yediyurappa called them as "future MLAs and Ministers", as he assured of keeping up the promise made to them.

The assurance came from the Chief Minister as 16 disqualified Congress-JD(S) legislators were welcomed into the BJP fold, a day after the Supreme Court paved the way for them to contest the Assembly bypolls in the state. "It is because of the sacrifice of these 17 Congress- JD(S) legislators and they quitting as MLAs, some even as Ministers, I have been able to take oath as the Chief Minister," Yediyurappa said.

Welcoming disqualified MLAs and their supporters, he said, "as the Chief Minister along with the party President I would like to assure you that, we will keep up the promise made to you word to word and won't betray you."

BJP, which aims to win a majority of the 15 constituencies where bypolls will be held is likely to field most of them as the party candidates. Senior BJP leaders said the state BJP is likely to send its final list of candidates to the central leadership for approval by Thursday evening.

The Supreme Court on Wednesday had upheld the disqualification of 17 Congress-JD(S) MLAs in Karnataka by the then Assembly Speaker K R Ramesh Kumar but paved the way for them to contest the by-polls.

While upholding their disqualification, the apex court set aside the portion of the orders by the then speaker by which the legislators were disqualified till the end of the current Assembly's term in 2023.

"We will hundred per cent win 15 out of 15 seats, let there be no doubt, I want to assure this to those joining the party...My greetings to former MLAs, who are also the future MLAs and Ministers," he added.

Bypolls to 15 of 17 seats represented by disqualified MLAs, whose resignation and absence from the trust vote had lead to the collapse of H D Kumaraswamy-led coalition government in July, will be held on December 5. The BJP will need to win at least six out of those 15 seats to remain in power.