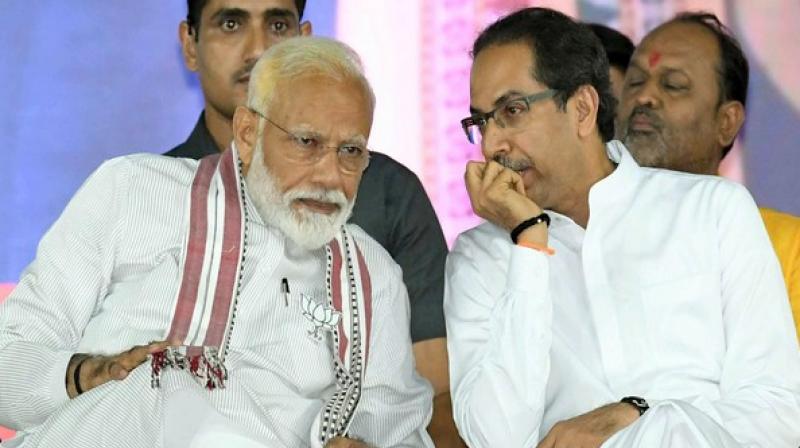 Shiv Sena on Saturday criticised the Centre on the economic situation, job loss and took a swipe at Union ministers Nirmala Sitharaman and Piyush Goyal for their comments on auto sales slump and the state of the economy. (Photo: ANI)

New Delhi: Shiv Sena on Saturday criticised the Centre on the economic situation, job loss and took a swipe at Union ministers Nirmala Sitharaman and Piyush Goyal for their comments on auto sales slump and the state of the economy.

In its mouthpiece Saamana, the BJP ally on Friday said while Prime Minister Narendra Modi and Home Minister Amit Shah were doing a "great job", their ministers were making their task tougher by "mocking the deteriorating state of economy and employment".

The party took a dig at Industry and Commerce Minister Piyush Goyal for his 'Einstien discovered gravity' comment and Finance Minister Sitharaman over her comment attributing the slump in automobile sales to "the mindsets of millennials, who now prefer to take Ola and Uber".

It said: "Our ministers are out to change the basics of science. But can the research of the ministers provide employment to lakhs of people who have lost their jobs?"

Saamana said Sitharaman's "research" on auto sales fall was "bigger than that of Einstien and Newton's".

The party went on to say: "After the inauguration of Mumbai-Maharashtra metro rail, the Chief Minister said around 60 lakh people will commute through it daily. Does it mean it will affect auto sales and cause unemployment?"

"Parley G sales have slumped and 10 thousand people have lost their jobs. Shall we draw the conclusion that children are not eating biscuits and they are busy playing PUBG instead?"

While criticising the government over the economy and job loss, Saamana wrote: "Traders, farmers and employees are losing their source of income and it is not related to Newton or Einstien. The same has been said by Manmohan Singh. The automobile industry has seen slowdown but the country's learned FM Nirmala Sitharaman is not ready to admit it."

"If we want to understand the current situation of the economy, we should understand Manmohan Singh's statement on headlines management," it said.