On the face of it, there seemed to be no immediate threat to the Gehlot government. 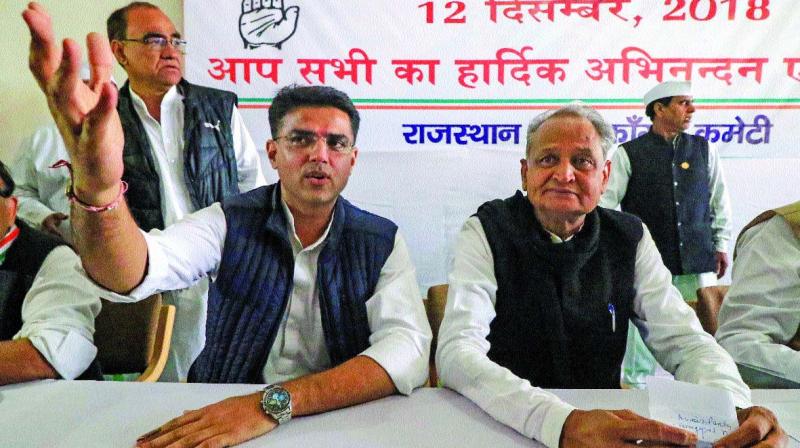 New Delhi: The fate of the Congress government in Rajasthan remained in a limbo on Monday as deputy chief minister Sachin Pilot dug in his heels and chief minister Ashok Gehlot paraded and then holed up his MLAs at the luxury Fairmont resort on the outskirts of Jaipur.

On the face of it, there seemed to be no immediate threat to the Gehlot government as the chief minister claimed the support of more than 100 MLAs, but Mr Pilot seemed determined to jump ship, refusing, it is understood, even a meeting with Congress leader Rahul Gandhi with whom he is known to have a personal rapport.

The day began on a negative note for the Congress with Mr Pilot, who has been on a warpath with his boss and arch rival Mr Gehlot, refusing to attend the Congress Legislature Party (CLP) meeting.

Though there was no official word on the number of MLAs who attended the meeting at Mr Gehlot’s home, party leaders claimed 106 legislators were there. Mr Pilot had claimed on Sunday night that he had the support of more than 30 MLAs.

In the 200-member Assembly, the Congress has 107 MLAs and the BJP 72. Later, when the CLP began after a delay of three hours, it adopted a resolution urging “strong disciplinary action” against any party office-bearer or CLP member who does anything to weaken the government or the party.

The resolution stopped short of naming Mr Pilot but blamed the BJP for the crisis.
On Saturday, Mr Gehlot had accused the Opposition party of trying to lure away Congress MLAs.

Sources in the Congress told this newspaper that the Congress central leadership has offered Mr Pilot the state home and finance ministries and withdrawal of FIR filed against him in the state.

Officially reaching out to him before the CLP meeting, Congress chief spokesperson Randeep Surjewala, adopting a conciliatory tone, said Mr Pilot and other MLAs could still attend the CLP meeting from which they had distanced themselves.
“When a member of the family gets annoyed, he does not make the family fall but sits with family members and resolves the issue,” he said.

“Doors are open for Sachin Pilot and other MLAs. They will be heard and solutions will be found. This is the discipline of the party,” the AICC spokesperson said.

Sources also claimed that Congress leader Priyanka Gandhi was in touch with Mr Pilot and was making efforts to broker peace between the two warring factions.