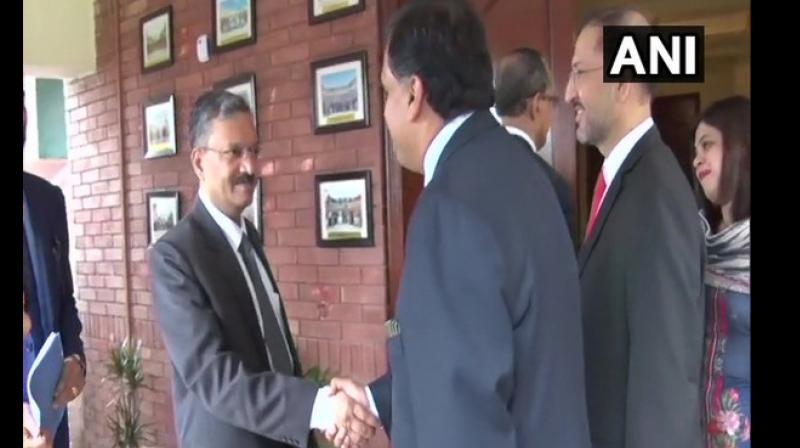 In the meeting, both sides agreed to maintain a channel of communication and work towards finalisation of the agreement on Kartarpur Sahib Corridor. (Photo: ANI)

New Delhi: Indian officials met their Pakistani counterpart at Wagah in Pakistan on Sunday morning to finalise the modalities of the Kartarpur corridor and shared concerns over individuals or organisations on the other side of the border which may disrupt or misuse the pilgrimage.

"Concerns regarding individuals or organisations based in Pakistan who may try to disrupt the pilgrimage and misuse the opportunity to play with the sentiments of the pilgrims were shared," said a statement issued by the Ministry of External Affairs.

"A dossier was also handed over to Pakistan side to highlight concerns in the matter. The Indian delegation has also sought consular presence in Kartarpur Sahib Gurudwara to be able to provide assistance to the pilgrims if required," the statement added.

The Kartarpur route along the India-Pakistan border is three kilometres away from Gurdaspur in Punjab. Once opened, it would allow Sikh pilgrims direct access to the historic Gurdwara Darbar Sahib in Kartarpur in Pakistan, where Guru Nanak Dev passed away in 1539.

Sunday's meeting also reviewed the progress reached in the three rounds of technical meeting that were held in March, April and May 2019. The two sides endorsed the crossing point or the 'zero point' coordinates that were agreed to at the technical level.

"Progress was made in finalising the draft Agreement with regard to the modalities. It was agreed to allow visa-free travel for the Indian passport holders and OCI card holders seven days a week," the statement said.

The Indian delegation separately requested Pakistan to permit and facilitate 'Nagar Kirtan' from Delhi to Nankana Sahib, located in Punjab province of Pakistan, in July 2019 and then again in October and November 2019, that is proposed to be organised by Shiromani Gurdwara Parbandhak Committee (SGPC) and Delhi Sikh Gurdwara Management Committee (DSGMC), the apex bodies involved in organising pilgrims' visits to Pakistan under the 1974 Bilateral protocol.

India also proposed Pakistan to allow 10,000 of its pilgrims to visit Pakistan under the 1974 Protocol on the auspicious occasion of 550th Birth Anniversary of Sri Guru Nanak Dev.

On its part, Pakistan highlighted the infrastructural constraints on their side and conveyed that they may be able to accommodate many of the Indian proposals in a phased manner.

In the meeting, both sides agreed to maintain a channel of communication and work towards finalisation of the agreement on Kartarpur Sahib Corridor.

India noted that significant progress has been made to build a state of art infrastructure, including passenger terminal on the Indian side that can handle over 15000 pilgrims in a day. This is targeted to be completed by October 31, 2019, the Ministry said in the statement.

The work on the four-lane highway to the crossing point at the International Boundary is progressing satisfactorily and is on schedule. It will be completed by end September 2019, it added.

"The technical teams would meet again to ensure seamless connectivity for the Kartarpur corridor is operational in time so that the pilgrimage can begin in November 2019," the statement read.