After the completion of four years, up to 25% of the Agniveers from a batch would be selected to serve as regular cadre in the armed forces 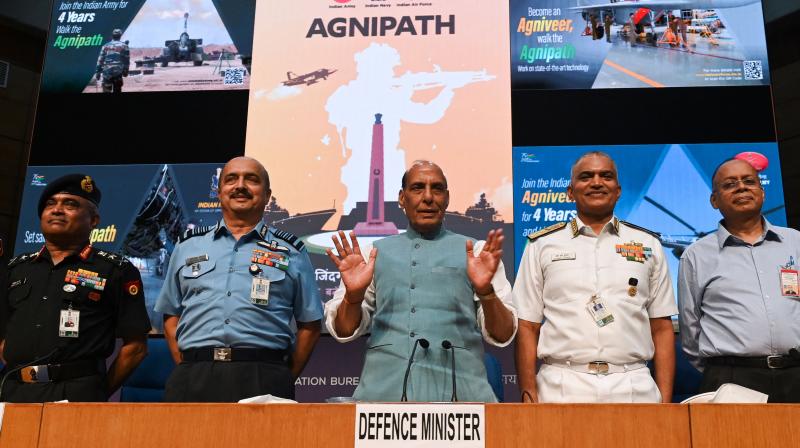 New Delhi: The government on Tuesday unveiled ‘Agnipath’, a radical recruitment policy for the armed forces under which ‘Agniveers’ will be hired on four-year contracts for the three defence services. The measure to cut down the salary and pension bill which stood at about 1.2 lakh crore this year.

After the completion of four years, up to 25 per cent of the ‘Agniveers’ from a batch would be selected to serve as regular cadre in the armed forces and rest would be released from the service with a lumpsum payment.

The proposal was approved by the Cabinet Committee on Security on Tuesday morning.

"Under the 'Agnipath' scheme, Indian youth will be provided an opportunity to serve in the armed forces as 'Agniveer'. This scheme has been brought to strengthen the security of the country. It is a transformative scheme," said defence minister Rajnath Singh at a press conference flanked by three service chiefs — Chief of Army Staff Gen. Manoj Pande, Chief of Naval Staff Admiral R. Hari Kumar and Chief of Air Staff Air Chief Marshal V.R. Chaudhari.

Singh said that many Central ministries and state governments would announce schemes in the coming days to recruit Agniveers who would be let go after their four-year term.

The armed forces will recruit 46,000 'Agniveers' in the current year in the age group of 17.5 to 21 years. They would form a distinct rank in the Armed Forces, different from the existing ranks. The recruitment is set to kick in within 90 days.

The scheme will also be opened to women progressively based on requirements. Soldiers who will join the service with Class 10 educational qualification will be provided a Class 12 certificate after completing their tenure.

Lt Gen Anil Puri, additional secretary of the department of military affairs (DMA), said that after the scheme the average age profile in the armed forces would come down to 26 years from the current 32 in a span of six to seven years.

The scheme will affect the composition of British-era regiments of the Indian Army like Sikh, Jat and Rajput among others, as the new soldiers will be recurited under all-India all-class basis.

The Army chief said that regimental system would evolve with greater national pan-India character. "Gradually, the class-based character of certain units and regiments, that have a fixed composition today, is expected to evolve into an all-India all-class structure," he said. Gen Pande said that the basic aim of recruiting Agniveers on all-India all-class basis was to widen the recruitment base and provide equal opportunity to the youth.

The monthly salary of an 'Agniveer' in the first year would be Rs 30,000 and the in-hand amount would be Rs 21,000 as Rs 9,000 would go to a corpus with an equal contribution of the government. Subsequently, the monthly salary in the second, third and fourth years would be Rs 33,000, Rs 36,500 and Rs 40,000. They will get applicable hardship and risk allowances.

Each 'Agniveer' would get Rs 11.71 lakh as 'Seva Nidhi Package' after competion of the four-year term and it will be exempted from income tax. There will be no entitlement to gratuity and pensionary benefits and they will be provided non-contributory life insurance cover of `48 lakh for the duration of their engagement period in the armed forces.

Defence minister Rajnath Singh denied that the new recruitment policy had been brought due to burgeoning pension bill after Modi government announced One Rank One Pension, saying that one should not look at such a scheme with suspicion. "We don't look at the Army from the angle of savings (money). Leave savings, whatever more spending is required our government is ready to spend. Our aim is that the country's border must be protected and our country should be fully secured. Whatever spending is required we will spend," he said.

Army chief Gen. Pande said that during the implementation and  stabilisation of the Agnipath scheme, the Army’s operational capabilities and preparedness, along the borders and the ability to deal with internal security challenges will be fully maintained. Gen. Pande said that he was confident that this change will bring new vigour and confidence in the Indian Army and make it stronger, more capable and in stride with the future.

Navy Chief Admiral Hari Kumar said the Agnipath initiative, and the Agniveers that it will produce would play a pivotal role in enhancing the effectiveness and efficiency of the Navy and the country as both grow and rise to the challenges.

"Having been part of the initial planning team over two years back, I can assure you that the initiative has been extensively deliberated and examined threadbare by all stakeholders. The outcomes of these deliberations have only reaffirmed my conviction that this step will be truly transformational," said Navy chief.

Air Force chief Air Chief Marshal V.R. Chaudhari said that the IAF will be impart a wide range of training and exposure to the Agniveers in aviation, weapons and sophisticated ground  systems.