Rahul also touched upon the issues of GST and demonetisation. 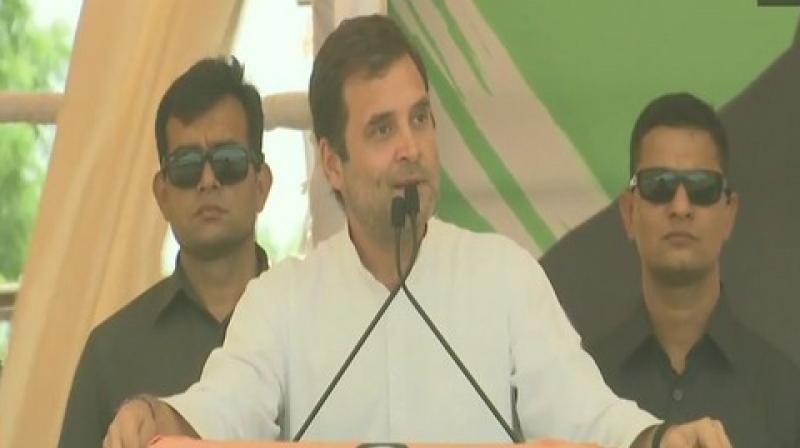 In a recent TV interview, Modi had said that rain was a better pick for Balakot strikes as the clouds could help IAF fighter jets evade detection by the Pakistani radar during the operation. (Photo: ANI)

Neemuch: Rahul Gandhi on Tuesday took a dig out at Prime Minister Narendra Modi over his 'cloud-radar' remark, questioning him that whether all aircraft will disappear from the radar whenever it rains in India.

"Narendra Modi told officers and Air Chief of Air Force that 'it will be beneficial as radar will not be able to track aircraft in bad weather'. Narendra Modi ji, whenever it rains in India, do all the aircraft disappear from the radar?" Rahul said at a public rally here.

In a recent TV interview, Modi had said that rain was a better pick for Balakot strikes as the clouds could help IAF fighter jets evade detection by the Pakistani radar during the operation.

Raking up the issues of GST and demonetisation, Rahul claimed that the move by BJP "destroyed" the country's economy and snatched the jobs of 27,000 youth in 24 hours.

"Unemployment is at a 45-year high. When demonetisation and Gabbar Singh Tax came, the economy of our country got destroyed. About 27,000 youth lost their jobs in 24 hours," the Congress president said.

Commenting on the Mandsaur police firing case, in which six farmers had died in June 2017, Rahul alleged, "In Mandsaur, farmers were shot. They were crying for help. Modi ji had promised that he would be there for them. But when farmers were attacked he was nowhere to be seen."

Continuing his tirade against BJP, Rahul accused the ruling party of backtracking from their promise of assisting the farmers and instead waiving off crores of loans of businessmen like Anil Ambani and Nirav Modi.

"In Madhya Pradesh, Rajasthan and Chhattisgarh, farmers requested you (Modi) to waive off their loans. But you said no. You said that I will waive off loans of thieves like Anil Ambani, Nirav Modi, Lalit Modi and Vijay Mallya," he said.
Rahul said that the promise of farm loan waiver was Modi's 'mann ki baat' and not of Congress.

"It was neither mine nor Kamal Nath's 'mann ki baat'. The farm loan waiver was Prime Minister's 'mann ki baat'. When a farmer is not able to repay a loan of Rs 20,000 crore to the bank, he is put behind bars. Is this correct? Nirav Modi took Rs 35,000 crore and fled to London. But he is not in jail. Not even Vijay Mallya and Lalit Modi," the Congress president said.

Rahul said that the Congress' NYAY scheme will not only help the poor, but will jumpstart the country's economy.

"Economists told me that without NYAY, economy cannot be back on track. They told me that it is not an option, you have to do it. So, I pushed forward this scheme which will ensure that every poor family will get Rs 3,60,000 in their bank accounts in five years," he further said.

Eight Lok Sabha seats in Madhya Pradesh will go to polls on May 19, which is the last phase of general elections. Counting of votes will take place on May 23.