'Modi ji, whenever it rains in India, do all aircraft disappear from the radar,' Gandhi said. 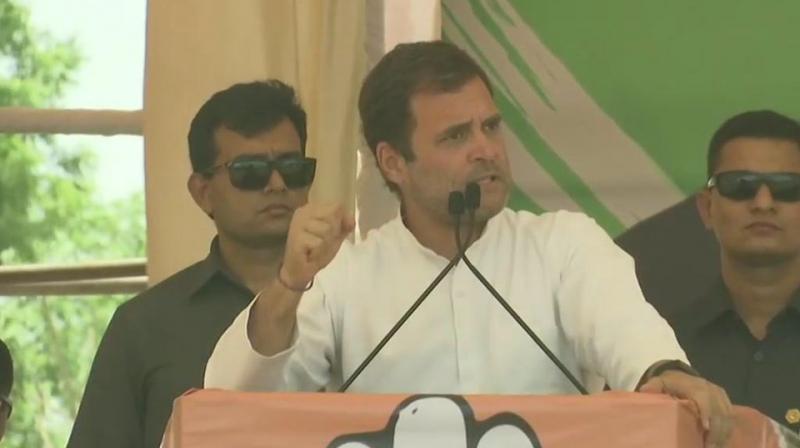 Addressing an election rally here ahead of the fourth and last phase of Lok Sabha polls in Madhya Pradesh, Gandhi also sought to know what did Modi do for the jobless youth. "Modi ji, whenever it rains in India, do all aircraft disappear from the radar," Gandhi said.

The Congress leader also made a veiled reference to Modi's interaction with actor Akshay Kumar in which the PM revealed that he loved mangoes as a child and still loves them. "Modi ji, you taught (us) how to eat mangoes; now tell the country what you did for jobless youth," he said.

Gandhi said his party's proposed minimum income guarantee scheme Nyay will jump start the Indian economy and set right the "injustice" done due to GST and demonetisation. The economy has been left in the doldrums due to flawed GST implementation and demonetisation. "The Nyay scheme will benefit five crore families who earn less than Rs 12,000 per month. This means Rs 72,000 will be deposited in the bank accounts of beneficiaries annually and Rs 3.6 lakh in five years," he said. "Nyay will ensure that people start purchasing goods, while small and medium businesses can start manufacturing the goods resulting in employment opportunities," he said. Nyay is not an option but a necessity, Gandhi said.

Gandhi said the money for implementation of Nyay will come from industrialists like Anil Ambani and Nirav Modi. The Congress president said his party's poll manifesto provides for self-employment opportunities for youth which would be hassle-free. Farmers who default on loan repayment won't be punished, he added.

Demonetisation and GST have left lakhs of people unemployed and small and medium enterprises have been left in the lurch, Gandhi said. The twin measures have destroyed the economy and led to highest unemployment ever, he added.