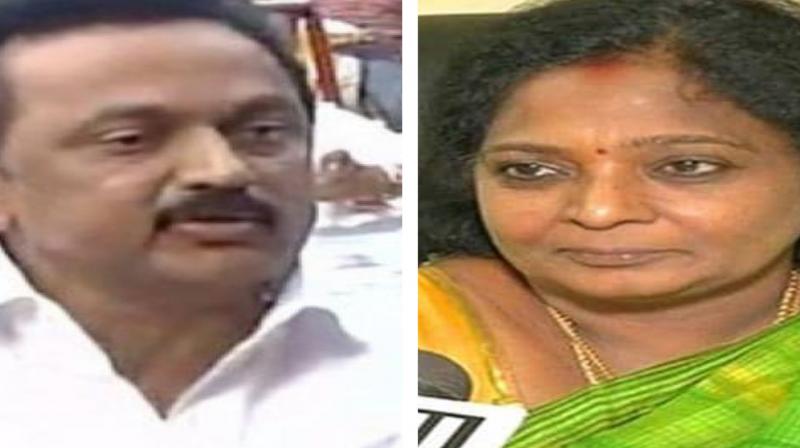 Asked about reports of Stalin being in talks with BJP, Soundararajan said 'that is true' and laughed. (Photo: ANI)

Chennai: The BJP's Tamil Nadu President Tamilisai Soundararajan Tuesday claimed DMK was in touch with her party for a possible post-poll tie-up, a statement that received sharp rebuke from M K Stalin, who asked her to prove her statement or quit politics.

Soundararajan's remarks in this connection were made before reporters at Tuticorin in the presence of AIADMK leader and Tamil Nadu Food Minister R Kamaraj.

BJP and AIADMK had faced the April 18 Lok Sabha polls in Tamil Nadu as allies.

The BJP's claim comes a day after TRS supremo and Telangana Chief Minister K Chandrasekara Rao met DMK President Stalin here as part of his outreach to regional parties in his bid to stitch up a federal front, sans the BJP and Congress.

Asked about reports of Stalin being in talks with BJP, Soundararajan said "that is true" and laughed.

"Because on one side (Stalin allies with) Rahul (Gandhi), Chandrasekhar Rao on the other, and (Prime Minister Narendra) Modi on another side," she said.

"All know DMK changes colours," she said in an apparent reference to the Dravidian party forging alliances.

BJP ally AIADMK also claimed DMK was in talks with the saffron party.

Senior party leader and Fisheries Minister D Jayakumar said DMK "will talk with Congress, Rao and at the same time with BJP."

"DMK alone has the capability to sail in three boats at the same time," he told reporters.

He also wondered how a "courtesy meet" between Stalin and Rao lasted for one hour.

Stalin hit back at the BJP leader with a strong statement, saying he was the one who proposed Congress President Rahul Gandhi as the Opposition's Prime Ministerial candidate, besides taking forward a campaign against Modi to unseat the BJP government at the Centre.

Soundararajan had uttered a "blatant lie", he said and charged the BJP with "sowing confusion" as it was "on the verge of defeat."

Stalin pointed out at his vociferous opposition to Modi, recalling he has been describing the PM as "fascist", "sadist" and "authoritarian", whose government, he said, should be unseated for the "untold miseries inflicted on the people" in the last five years.

The DMK leader noted he has been campaigning against Modi not only in Tamil Nadu, but had also spoken against him at the TMC-sponsored rally of opposition parties in Kolkata earlier.

He recalled that Rao had met him last year too, and even on Monday, and that the DMK had made it clear their meeting was a "courtesy call."

Stalin said the DMK would not be involved in any "back door dealings", vis-a-vis any alliance.

"DMK has been transparent. It has said clearly who should be the Prime Minister and who should be not. DMK is determined that Modi should not become PM again," he said.

The party was more clear that the next government should be headed by Gandhi, Stalin added.

DMK ally Congress also hit out at Soundararajan, alleging she was making such statements out of desperation.

He said when West Bengal Chief Minister Mamata Banerjee had herself refused to speak to Modi over the cyclone Fani issue, "what is Stalin going to discuss with" the Prime Minister.