Shah and Gujarat deputy chief minister Nitin Patel mounted an open vehicle, and were welcomed by thousands of people along the route. 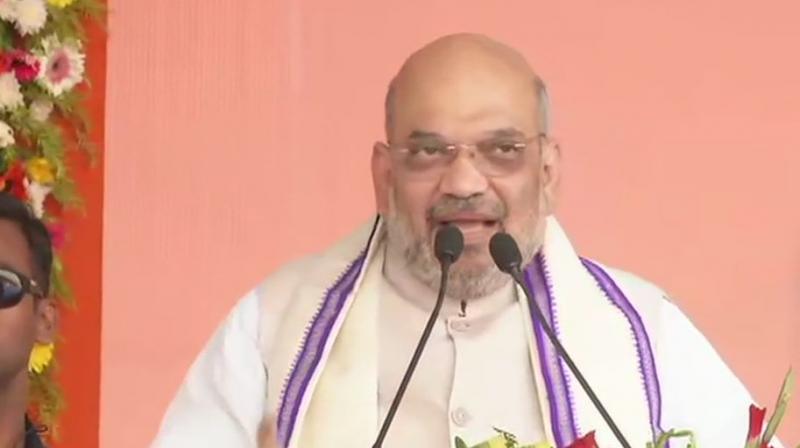 Kalol: BJP chief Amit Shah, who is contesting elections from Gandhinagar Lok Sabha constituency, Sunday participated in a roadshow in Kalol assembly segment. The roadshow was kicked off in the evening after Shah paid tributes at the statue of Dalit icon Babasaheb Ambedkar on the occasion of his birth anniversary in Kalol town.

During the procession, Shah and Gujarat deputy chief minister Nitin Patel mounted an open vehicle, and were welcomed by thousands of people along the route.

Shah also waved back to the people. The vehicle passed through various areas of the town including Ambedkar circle, railway station, Tower chowk, Vakhariya cross road etc. The roadshow culminated at Panchwati Hanuman temple, a distance of around 7 kms from the Ambedkar statue. Hundreds of BJP workers in cars and on motorcycles also accompanied Shah.

Earlier in the day, Shah joined various campaign-related activities in the Lok Sabha constituency. He held a meeting with BJP workers and asked them to work hard for the party's victory.

The BJP chief also interacted with the chairmen and secretaries of various housing societies in Sabarmati, Gathlodiya and Naranpura areas of the constituency and appealed to them to re-elect Narendra Modi government for prosperous India. Shah had earlier held road shows on the day of filing of his nomination papers and on April 6. Polling for all 26 seats in Gujarat will be held on April 23.