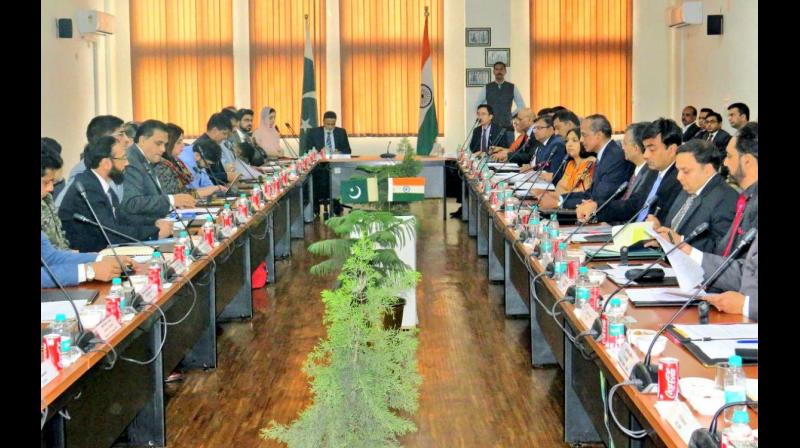 The India and Pakistan officials held the first meeting on Thursday to discuss the modalities and the draft agreement for facilitation of pilgrims to visit Gurudwara Kartarpur Sahib using the Kartarpur Corridor at Attari, India in a cordial environment. (Photo: Twitter/ANI)

Attari (Amritsar): After the first meeting on Kartarpur corridor, India-Pakistan officials released a joint statement on Thursday and said, “Both sides held detailed and constructive discussions on various aspects and provisions of the proposed agreement and agreed to work towards expeditiously operationalising the Kartarpur Sahib Corridor.”

The Indian delegation at the meeting was led by SCL Das, Joint Secretary in the Ministry of Home Affairs while the Pakistani team was headed by Dr Mohammad Faisal, DG (South Asia and SAARC) of Pakistan Ministry of Foreign Affairs.

He said, "India pressed on the need for arranging the visit of at least 5000 pilgrims per day, to begin with, phase 1 of the project. This should include not only Indian nationals but people of Indian origin as well."

"We've strongly urged them to allow because people from all over the country and world will be coming for all seven days throughout the year without any break, provide for a much higher size of 'jathhas' of visiting pilgrims by another 10,000 on special days like Gurupurab and Baisakhi.

India-Pakistan also held expert-level discussions between the technical experts on the alignment and other details of the proposed corridor, the statement said.

Emphasising on the visa-free allowance to the tourist, Das said that India had put forward in the meeting that there should not be any additional encumbrances in the form of any documentation or procedures.

The statement added that the meeting was held to discuss the modalities and the draft agreement for facilitation of pilgrims to visit Gurudwara Kartarpur Sahib using the Kartarpur Corridor, in a cordial environment.

Talking about the meeting, MEA Joint Secretary Deepak Mittal commented, "Our expectations were made clear to Pakistan that we would like them not to allow any miscreant or any kind of activity which would be against the spirit with which pilgrims would be going to Kartarpur Gurudwara."

However, Deepak Mittal stated that this isn't meant for any resumption of bilateral dialogues with Pakistan. This meeting was held with an objective that pilgrims can have an easy access to Kartarpur Sahib.

From the Indian side, officials comprised representatives from the Union Home Ministry, External Affairs Ministry, BSF, National Highways Authority of India and the Punjab government.

Pakistan has committed to open the corridor in November this year on the occasion of the 550th birth anniversary of Guru Nanak.

A Kartarpur Gate has also been proposed to be set up on the Indian side of the International Border which would stand out as a monumental symbol to commemorate the 550th 'Prakash Purb' (birth anniversary) of Guru Nanak Dev.

A proposed passenger terminal building (PTB) complex will have all the necessary amenities to facilitate pilgrims intending to visit the Kartarpur Sahib Gurdwara.