Ibobi Singh has argued that Cong being the single largest party with 28 seats should be given the first opportunity to form the govt. 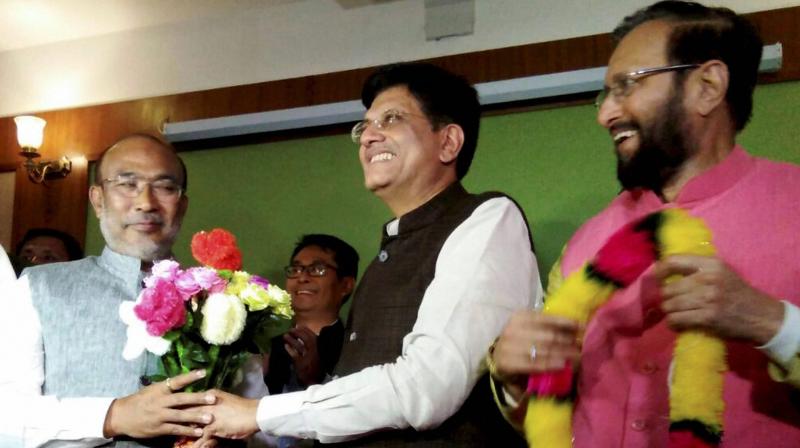 Imphal: Manipur Chief Minister O Ibobi Singh resigned on Monday night after being prodded by Governor Najma Heptullah who said she could not start the process of government formation till he quits.

Ibobi Singh, who earlier in the day said that he would resign by tomorrow, submitted his resignation letter to Heptullah, Deputy Chief Minister Gaikhangam said.

Heptullah has said that she could only start the process of government formation once the incumbent chief minister resigned as per norms.

Earlier the Governor stated, "I have not received till today any resignation from the chief minister (Ibobi Singh) though I told him yesterday I can start the process of government formation only after you resign".

Meanwhile, N Biren Singh was elected unanimously as the leader of BJP Legislature Party and staked claim to form the government after meeting the Governor.

Goel also said they enjoyed the support of smaller parties.

Ibobi Singh who has been serving as chief minister for 15 years since 2002 was again elected the leader of the Congress Legislature Party yesterday and had staked claim to form the government late last night.

Ibobi Singh has argued that Congress being the single largest party with 28 seats should be given the first opportunity to form the government. "I am ready for a floor test and I have the numbers with me," he said.

In his meeting with Heptullah last night, he claimed to have the support of four National People's Party MLAs. "On seeing names of four NPP MLAs on an ordinary piece of paper, Heptullah asked Ibobi Singh to bring the NPP president and the MLAs," a Raj Bhavan source said.

NPP general secretary Vivek Raj, however, said that the party and all its MLAs were with BJP.

BJP yesterday claimed that it enjoyed the support of 32 MLAs in the 60-member Assembly, one more than the required number of 31.

BJP claimed to have support of Shyamkumar, one of the 28 Congress MLAs, the lone MLA of both LJP and All India Trinamool Congress, besides four MLAs each of NPP and NPF.

Outgoing Deputy CM, Gaikhangam, however, described as "completely baseless" reports that Congress legislators including Shyamkumar, were in touch with the BJP.