If OPS was not friendly with the DMK in the Assembly, I would have let him be chief minister: Sasikala. 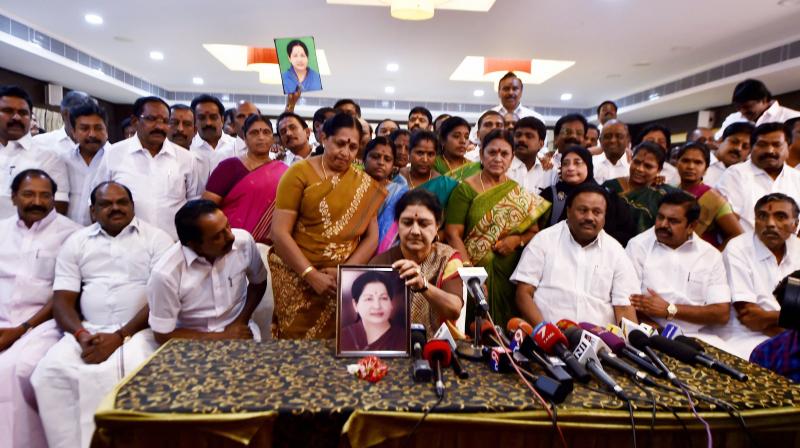 AIADMK General Secretary VK Sasikala along with party's MLAs supporting her during the press conference at the resort in Koovathur at East Coast Road where various AIADMK MLAs are camping to decide on the further course of action in forming new government, outskirts of Chennai on Sunday. (Photo: PTI)

Chennai: Giving a new twist to the political drama, AIADMK general secretary V.K. Sasikala on Monday said she decided to remove O. Panneerselvam as the chief minister because of his “friendship” with the DMK and complaints from his own Cabinet colleagues that he was “moving quite close” with the “enemy party”.

Addressing party cadres at the Poes Garden residence of late chief minister J. Jayalalithaa, Ms Sasikala termed Mr Panneerselvam as a “traitor” whose true colours have now come to light and that his designs of splitting the AIADMK will never materialise. She had been with Jayalalithaa for 33 years and she is used to threats. “I have seen 1,000 such ‘Panneerselvams’,” she said.

Claiming that she could have become the chief minister on the day her friend Jayalalithaa passed away in Apollo Hospitals, Ms Sasikala said it was she who asked Mr Panneerselvam to head the government and take oath immediately since there were “designs and conspiracies to split the AIADMK”.

“If OPS was not friendly with the DMK in the Assembly, I would have let him be chief minister. But he has pushed us into taking action. Why did Mr Panneerselvam not clarify it on the floor of the House that he does not support the DMK when its leader Duraimurugan said that his party’s MLAs are with the chief minister?” she asked.

Turning emotional for the second consecutive day, Ms Sasikala spoke about how she was helping late Jayalalithaa in managing the affairs of the AIADMK and how she played a role in stitching alliances for the party. She also hit out at Mr Panneerselvam accusing him of being “never loyal to the party”.