'BJP will be whitewashed': Tejashwi Yadav after meeting Mayawati 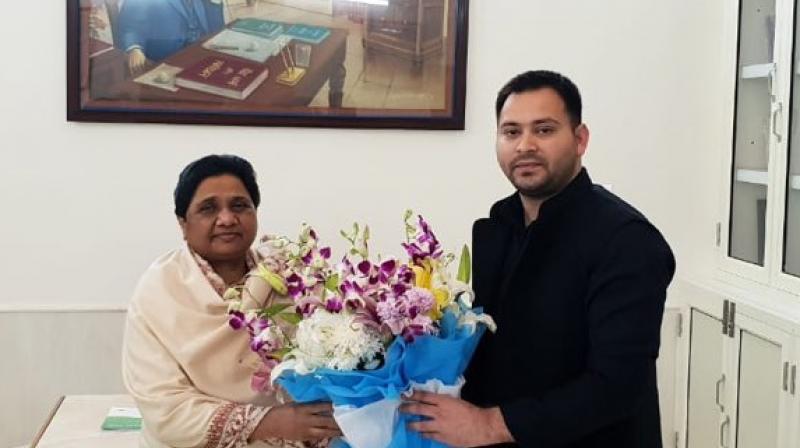 Lucknow: The Bharatiya Janata Party does not stand a chance to come back into power and will be whitewashed in Uttar Pradesh and Bihar, RJD leader Tejashwi Yadav said on Sunday after meeting BSP supremo Mayawati at her residence in Lucknow.

The meeting came a day after Mayawati announced an alliance with Samajwadi Party chief Akhilesh Yadav in Uttar Pradesh for the upcoming Lok Sabha elections.

Welcoming the “grand alliance” in Uttar Pradesh, Tejashwi expressed confidence that the SP-BSP combination will win all seats in the state.

"There is atmosphere today where they want to scrap Baba Saheb's constitution and implement 'Nagpur laws'. People welcome the step taken by Mayawati and Akhilesh Yadav. BJP will be whitewashed in Uttar Pradesh and Bihar. They will not win even one seat in UP. The SP-BSP alliance will win all seats," the RJD leader told the media.

In a joint press conference on Saturday, Mayawati and Akhilesh announced that their parties have agreed to form an alliance in which the two parties will contest in 38 seats each in Uttar Pradesh.

However, the two leaders left the Congress out of their alliance, leaving only Amethi and Raebareli seats for the Rahul Gandhi party. They have also kept two seats for the smaller parties.

Reacting on the decision, senior RJD leader Raghuvansh Prasad Singh Sunday said that exclusion of Congress from the SP-BSP alliance in Uttar Pradesh was wrong and not a good sign for future alliances at national level.

"This (SP-BSP alliance excluding Congress) is not good. They have stitched an alliance leaving Congress out of it. The grand alliance should be formed with Congress," Singh was quoted by news agency PTI as saying.

The Hindustani Awam Morcha (S), another constituent of the grand alliance in Bihar, has also expressed reservation over Congress' exclusion in the alliance announced by UP's satraps Mayawati and Akhilesh Yadav.

HAM(S) chief and former CM Jitan Ram Manjhi had said "if they (SP-BSP) neglect Congress in UP, then they may have to face loss as BJP may be able to gain from it"

Following the “grand snub”, the Congress on Sunday announced that it will contest on all the 80 Lok Sabha seats in Uttar Pradesh on its own in the Lok Sabha polls.