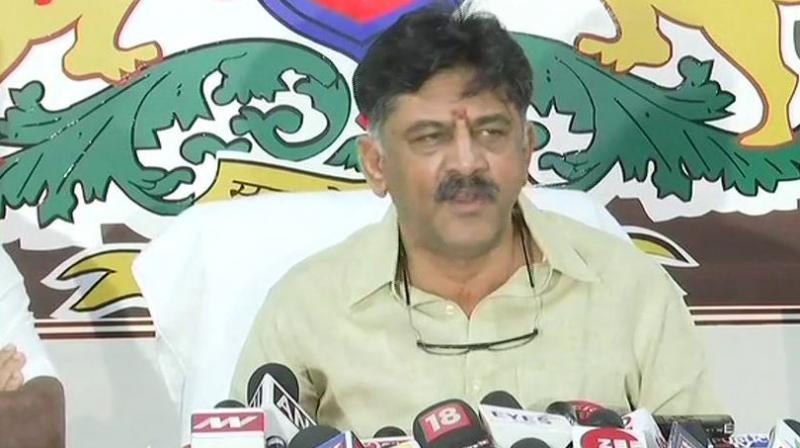 Bengaluru: Karnataka Water Resource minister D K Shivakumar on Sunday said the BJP’s ‘Operation Lotus’ to topple the state’s coalition government was for real, alleging that three Congress MLAs were camping in a hotel in Mumbai in the “company of some BJP leaders”.

“Horse trading is going on in the state. Three of our MLAs are in Mumbai in a hotel with some BJP MLAs and leaders. We are aware of what has transpired there and how much has been offered to them,” he said.

Operation Lotus is a reference to the BJP allegedly luring several opposition MLAs to defect to ensure stability of its then-government headed by B S Yeddyurappa in Karnataka in 2008.

Shivakumar, who had earned the reputation of being a “trouble-shooter” in the Congress for bailing out the party from many crises in the past, accused Chief Minister H D Kumaraswamy of being “lenient” towards the BJP.

“Our chief minister is bit lenient towards the BJP. By ‘lenient’, I mean he is not exposing the facts he knows. All the MLAs have conveyed to the chief minister about the ongoing conspiracies. They have also told Siddaramaiah about it.”

“The chief minister is adopting a policy of wait and watch. If I was in his place, I would have exposed it within 24 hours,” Shivakumar said.

Shivakumar, however, exuded confidence that the BJP would not succeed in its attempt.

“You have been saying that a ‘kranti’ (revolution) may happen after Makar Sankranti. Let us see. It is not so easy because there is already anti-defection law in place, but we are aware of what you are hinting at,” he said in an apparent reference to the opposition BJP in the state.

The water resources minister also wondered why the income tax department and the anti-corruption bureau failed to initiate any action on a complaint by Dinesh Gundu Rao on the matter. “We do not know what progress these two agencies have made so far, but sitting on the complaint by a political party is not good,” he said.

Many Congress MLAs in the southern state have alleged that they were approached by the BJP leaders to quit their party and join them.

The saffron party has trashed the charges, saying the coalition partners were hiding their shortcomings and internal strife by making false accusations at the opposition.