SP-Cong alliance in UP? Posters of Priyanka, Dimple emerge

Rahul Gandhi is leading the alliance talks despite opposition from some Congress leaders. 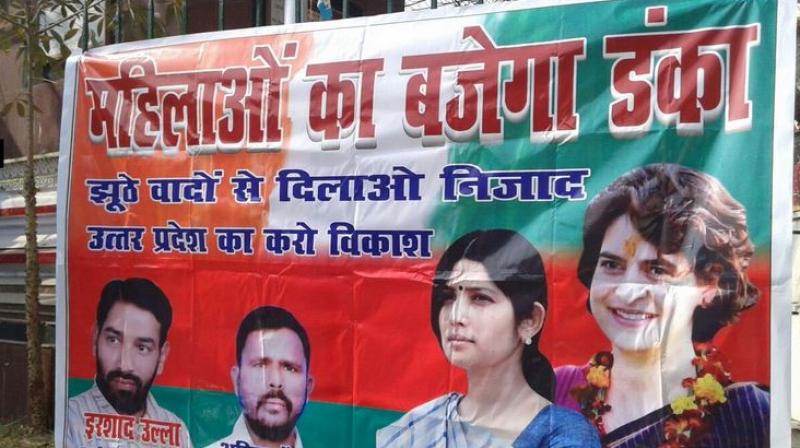 Posters with pictures of Priyanka Gandhi and Dimple Yadav have emerged across Allahabad in Uttar Pradesh. (Photo: ANI/Twitter)

Allahabad: Posters with pictures of Priyanka Gandhi and Akhilesh Yadav’s wife Dimple Yadav have emerged across Allahabad amid talks of alliance between the Congress and Uttar Pradesh Chief Minister Akhilesh Yadav-led faction of the Samajwadi Party for the upcoming Assembly elections in the state.

According to reports, Priyanka has played an important role in the talks for an alliance between the two parties and Dimple has been heading the alliance talks on behalf of Akhilesh. The two are also expected to play major roles in the election campaigns.

Rahul Gandhi is leading the alliance talks despite opposition from some Congress leaders. The talks of collaboration between the two parties are underway amid a bitter feud between Akhilesh and his father Mulayam Singh Yadav for the SP symbol 'cycle'.

Mulayam is said to be against the SP-Congress alliance.

The Election Commission on Friday heard the matter of the party symbol, and reserved its verdict. Candidates from both Mulayam and Akhilesh camps cannot fight election on the same symbol at the same time, therefore, the EC will have to take a call on the issue before the filing of nominations begins.

The EC is expected to announce its order on the matter by January 16, a day before nominations for the Assembly elections start in UP.

The SP faction headed by Akhilesh is confident of not only retaining the cycle symbol, but getting "absolute majority" in the polls on the chief minister's development plank.

"The entire party is behind our national president Akhilesh Yadav, who was elected unanimously. We are finalising our list of candidates and it will be out soon," said Naresh Uttam, SP state president appointed by Akhilesh replacing his warring uncle Shivpal Yadav. "

We are confident of retaining the 'cycle' symbol."

He said SP will get "absolute majority" as the chief minister's development agenda is well known to people and they have made up their minds to vote for him. "Our main agenda for polls will be development. We are ahead of rival parties due to works done by our government in past five years," he said.