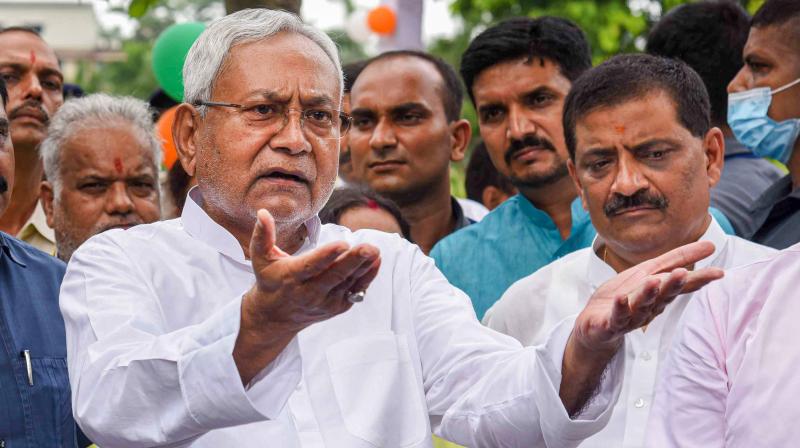 Patna: Bihar chief minister Nitish Kumar on Friday said that he has been working hard to unite the Opposition parties ahead of the 2024 elections. He also dismissed speculations that he may be projected as the Prime Minister’s face for the upcoming general elections.

"I am saying this with folded hands that I have no such desire. I have been getting lots of phone calls and I assure them that I am working hard to unite all Opposition parties. It will be good if they come and work together," Mr Kumar said on the sidelines of an event in Patna.

Ever since he formed an alliance government with the RJD and the Congress in Bihar, speculations about him being projected as the Prime Minister’s face by the Opposition parties have been gaining ground.

A section in the Opposition, including his party leaders, has been saying that "no leader in the country has an image like Nitish Kumar and he can be made the PM’s face in 2024."

The debate over Mr Kumar being projected as the PM's face was triggered after he threw a challenge to the BJP by saying that "it needs to worry about its prospects in 2024."

He had also used the occasion to urge the Opposition parties to unite against the BJP-led NDA.

Mr Kumar ended his ties with the BJP-led NDA on Tuesday and announced his alliance with the RJD and the Congress.

His decision to quit the NDA was termed a "betrayal" by the BJP. After the split, the BJP leaders unleashed a series of allegations against him.

The chief minister, however, called the allegations levelled by the BJP "bogus" and "baseless".

"Those who speak against me may get some benefits in their party. I don’t worry about these things at all. I will continue to work for everyone," Mr Kumar said.

He also spoke about the promises made by deputy CM Tejashwi Yadav regarding providing 10 lakh jobs in Bihar. He said that the state government will make all efforts to provide "as many jobs as possible" in Bihar.

During the 2020 Assembly elections campaign, Mr Yadav had promised to provide 10 lakh jobs to the people of Bihar if voted to power.

Mr Kumar also reacted strongly when asked whether there was fear of ED or CBI being used against the new ruling alliance. He said, "I have no such fears. Those who are in the habit of misusing powers will face the public soon."

When he was asked about his reactions to the BJP raising questions over Mr Yadav getting Z+ security cover, Mr Kumar said, "They shouldn’t object to it. He is the deputy CM."