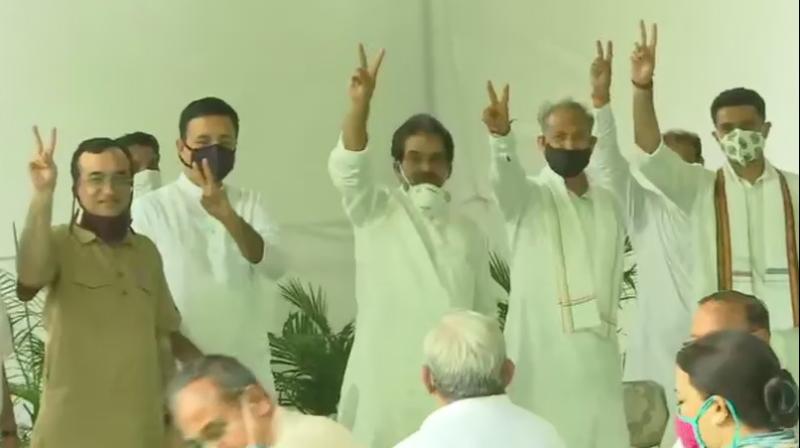 Gehlot and Pilot patch up. (ANI)

A day before the Assembly session begins in Rajasthan, significant political developments have taken place in the Congress as well as the BJP camps.

The Congress on Thursday revoked the suspension of Bhanwarlal Sharma and Vishvendra Singh, two of its MLAs who had rebelled against the Ashok Gehlot government. The party also held a meeting with all its MLAs, including former rebel Sachin Pilot, at Chief Minister Ashok Gehlot's residence.

Significantly, before the Congress legislative party meeting, Pilot and Gehlot shook hands in a moment, marking the return of the sacked deputy chief minister and 18 other dissident MLAs to the party-fold after the intervention earlier this week by the top Congress leadership in Delhi.

Sharma and Singh were suspended from the party's primary membership last month over their alleged involvement in a conspiracy to topple the Congress government in the state.

Eighteen MLAs had backed Pilot in the rebellion, demanding a change of leadership in Rajasthan.

Meanwhile, the Opposition BJP also held a meeting, where it decided to move a no-confidence against the Gehlot government in the Assembly tomorrow.