AAP government demands L-G to direct IAS officers to end their 'strike', take action against those who have struck work for 'four months'. 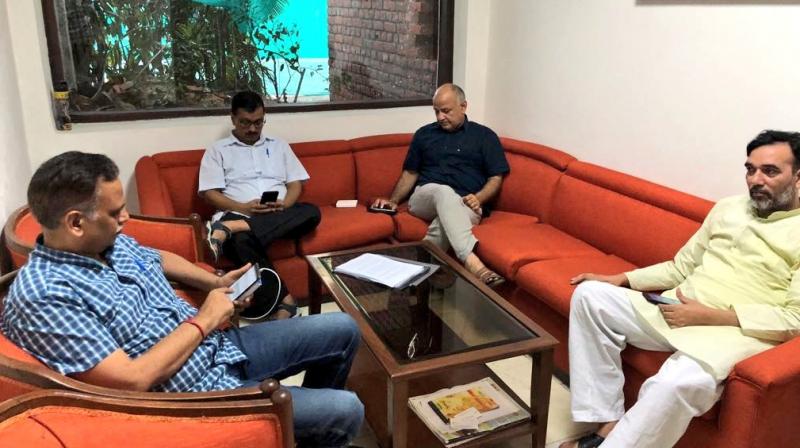 The L-G's office slammed Kejriwal's sit-in, saying it was one more 'dharna without reason'. (Photo: Twitter/@ArvindKejriwal)

New Delhi: Deputy Chief Minister Manish Sisodia on Wednesday began an indefinite hunger strike at the office of the Lt Governor, where Chief Minister Arvind Kejriwal and his cabinet colleagues spent the second night, a day after Health Minister Satyendar Jain sat on a hunger strike there to press for their demands.

The Aam Admi Party (AAP) government's demands to the L-G include direction to Indian Administrative Services (IAS) officers to end their "strike", action against those who have struck work for "four months". It has also asked the L-G to approve the proposal for doorstep delivery of rations.

Kejriwal tweeted from L-G office Wednesday morning, seeking to know whether it was "possible for IAS officers to return to work without green signal from PMO (Prime Minister's Office)?"

In another tweet, Kejriwal said their struggle continues to clear "hurdles" in Delhi's development.

Announcing on Twitter, where Kejriwal and his cabinet colleagues are quite active since the beginning of their sit-in at L-G office at 6 pm on Monday, Sisodia said he too has joined Jain in sitting on an indefinite hunger strike at the L-G office.

"Today, I am also sitting on an indefinite hunger strike to ensure that Delhiites get their right and also get their pending works cleared. Satyendar Jain's hunger strike is continuing since yesterday..." Sisodia tweeted in Hindi.

On Tuesday, Kejriwal released a video from L-G office and said AAP ministers had "no option" but to stage a sit-in at L-G's office as Lt Governor Anil Baijal was not paying heed to the Delhi government's demands "despite several requests".

It was the first time in the history of Delhi that a chief minister and his cabinet colleagues have spent a night at the L-G's office in protest to press for their demands, sources said.

The move drew criticism from the Delhi Bharatiya Janata Party (BJP) unit, which termed the sit-in as a "mockery of democracy".

However, the AAP maintained their fight will continue and they will not be "bogged down" till their demands are met.

"Modi and L-G are not allowing us to work for the betterment. L-G is orchestrating the strike by the IAS officers," AAP leader Sanjay Singh said on Tuesday.

According to the AAP government, officers have not been attending meetings with the ministers and not picking up their calls due to which government work for people was suffering. Officers have gone on a "partial strike" since the alleged assault on Chief Secretary Anshu Prakash on the intervening night of February 19-20, it said.

In the video message, Kejriwal had said he and his ministers have been requesting the L-G since February 23 to issue directions to the IAS officers to end their "strike", but the Lt Governor was not paying heed to their demands.

Kejriwal on Tuesday alleged that some officers have informed him that the L-G's office was "orchestrating" the "officers' strike" and that's why the Lt Governor does not want bureaucrats to end their strike.

The L-G's office slammed Kejriwal's sit-in, saying it was one more "dharna without reason". A statement issued by Baijal's office Tuesday evening stated that he was "threatened" to summon officers and issue directions to them to end their "strike" immediately.