India   Politics  13 May 2019  Did not act in films for five years: Kher banks on Modi wave in Chandigarh
India, Politics

Did not act in films for five years: Kher banks on Modi wave in Chandigarh 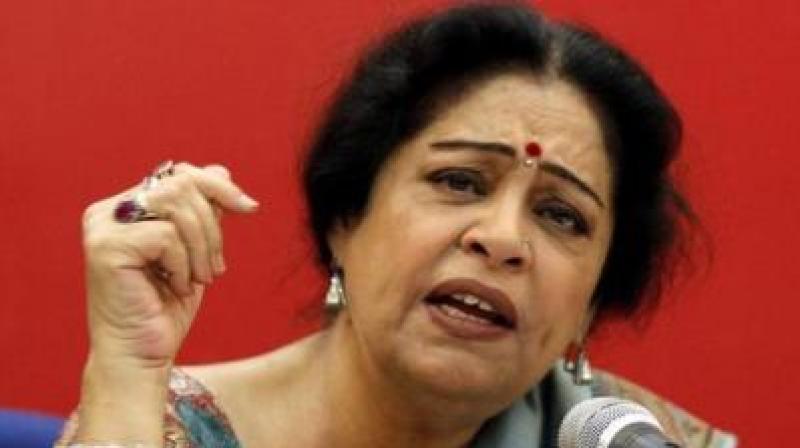 'What has he done for the city? Compare 5 years of my performance and his 15 years. He did nothing... He does not have any intention to work,' Kher spoke about her opposition candidate, Bansal. (Photo: File)

Chandigarh:  BJP candidate Kirron Kher says she is banking on the "Modi wave" and her work as an MP from Chandigarh to sail through the contest to win the seat for the second consecutive term.

Contesting against Congress nominee Pawan Kumar Bansal, a four-time MP, she blamed him for doing "nothing" for Chandigarh and promised to bring the city to the top position in cleanliness and sanitation.

But Bansal has blamed Kher for a drop in the city's ranking from third to 20th spot in Swachh Survekshan 2019.

"What has he done for the city? Compare five years of my performance and his 15 years. He did nothing... He does not have any intention to work," Kher claimed.

"I have a clean image and on the other hand, the entire country knows his image. It is my city and my hometown. I have done a lot of work here...I have been a vocal MP. I did not act in films for five years," she told PTI here.

Kher shared her vision for the next five years for 'the city beautiful', as it is popularly known, saying she wanted to convert government schools into English medium, promote solar projects and make the city a start-up hub on the lines of Silicon Valley, home to global technology companies.

Exuding confidence about her victory, she said, "There is a factor of the Modi wave and also the work I carried out in the city in the past five years."

Listing out her achievements, Kher said she had worked for every sector, including health and education, and pointed out that the upper age limit in government jobs was raised from 25 to 37 years.

To solve the growing problem of traffic congestion in the city, Kher batted for bringing in a rapid transit system, monorail and mini buses.

She dismissed Bansal's idea of bringing in the metro rail as "non-feasible", saying a huge financial outlay is needed for its implementation.

"What was stopping him from bringing the metro here? He knew the metro could not come here as engineers did not recommend it for a city like Chandigarh," she said, adding that the project if implemented, would lead to the demolition of several markets.

On Bansal's remark of "restoring lost glory” of Chandigarh, Kher said when the Congress candidate was an MP, the maximum number of slum colonies came up in the city.

"We started an exercise of resettling them under Pradhan Mantri Awas Yojana," she said.

Kher, in 2014 Lok Sabha polls, had won from Chandigarh seat by defeating Bansal with a margin of 69,642 votes.

Polling to Chandigarh parliamentary constituency will take place on May 19.