India on Russia oil: We buy in a month what Europe does 1 day

US is willing to be a partner of choice with India across virtually every realm -- commerce, technology, education & security, Blinken said 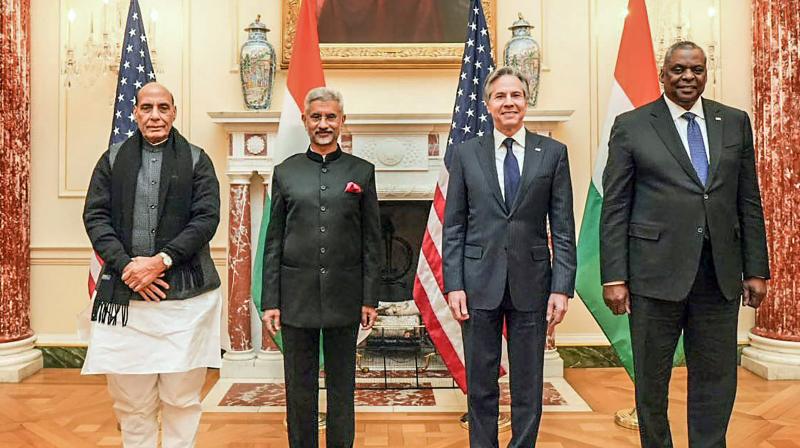 New Delhi: After a “very candid and direct conversation” at the virtual meeting between Prime Minister Narendra Modi and US President Joe Biden on Monday and the in-person India-US 2+2 talks at the foreign and defence ministerial level in Washington which followed it, US secretary of state Antony J. Blinken said his country “is willing to be a partner of choice with India across virtually every realm -- commerce, technology, education and security,” but also urged India “to avoid major new transactions for Russian weapons systems” and also “not to increase its purchases of Russian energy”.

Briefing about the talks between the two countries, Mr Blinken made it clear that “India has to make its own decisions about how it approaches this (Russia) challenge,” adding no decision had yet been made on either imposing sanctions on India or granting any waiver to it for its purchase of S-400 missiles from Russia. He further said it was important for all countries with “leverage to press (Russian President Vladimir) Putin to end the war” in Ukraine. He added that “India’s relationship with Russia developed over decades at a time when the United States was not able to be a partner to India” and that “times have changed”.

On India’s part, in a clear message to the United States, Mr Jaishankar told reporters in response to a question on the purchase of Russian oil: “Attention should instead be focused on Europe and that India’s total (oil and natural gas) purchases for the month (from Russia) would be less than what Europe does in an afternoon.”

In what could worry New Delhi, Mr Blinken also publicly revealed that his country was “monitoring some recent concerning developments in India, including a rise in human rights abuses by some government, police and prison officials” in view of the “commitment to our democratic values, such as protecting human rights”.

Both countries also called on Pakistan to take immediate, sustained, and irreversible action to ensure that no territory under its control is used for terrorist attacks.

Highlighting, the increasing security partnership between India and the US, Mr Austin said India and the US have “built a partnership that is now a cornerstone of security in the Indo-Pacific” and that “we are positioning the US and Indian militaries to operate and coordinate closely together across all domains and increasingly across the wider Indo-Pacific, all in support of the rule of law, freedom of the seas and regional peace and security”. He added that “democracies must stand together to defend the values that we all share,” further stating that “as we operationalise our defence agreements and take our cooperation to the next level, I believe that we can sustain and strengthen a favourable balance of power in the region”.

Saying China was seeking to “refashion the region and the international system more broadly in ways that serve its authoritarian interests”, Mr Austin said both nations recently reached an agreement to work together on air-launched unmanned aerial vehicles through the Defence Technology and Trade Initiative and have now “agreed to launch new supply chain cooperation measures that will let us more swiftly support each other’s priority defence requirements”.

In his comments, Mr Singh said: “During the meeting, we also discussed about our neighbours and we tried to make sure that our assessment is also shared. During this talk, we have spoken about counter-terrorism and how this (terrorism) has been used against India. I have pointed out that India would focus on the co-development of productions and all the investors should come to India. They are welcome because in India they can develop under the ‘Make in India’… we want to build and make everything in India.”

The US secretary of state, meanwhile, called on nations “to condemn Moscow’s increasingly brutal actions” but added that “India has made very strong statements in New York at the UN, the minister, before the Indian Parliament, condemning the killing of civilians in Ukraine, calling for an independent investigation of these atrocities”, and that “India is providing significant humanitarian assistance to the people of Ukraine, notably medicines”.

Later, a US official told reporters that at their virtual meeting, Mr Modi and President Biden “covered the whole range of issues related to Russia-Ukraine” in a “very candid and direct conversation”. The White House, in a statement on the talks between Mr Modi and Mr Biden, said both leaders “committed to strengthening the US-India relationship through cooperation on clean energy, technology and military cooperation and expanded economic and people-to-people ties” and also “committed to continue cooperation -- bilaterally and multilaterally -- on ending the Covid-19 pandemic, strengthening global health security, advancing global food security, and ensuring a free and open Indo-Pacific”.

Meanwhile, a joint statement released by the two nations after the 2+2 talks said: “The ministers reaffirmed their commitment to a free and open Indo-Pacific in which the sovereignty and territorial integrity of all states are respected and countries are free from military, economic and political coercion. They further reaffirmed their dedication to promoting regional stability and prosperity, with an inclusive regional architecture, abiding by the rule of law, the freedom of navigation and overflight, peaceful resolution of disputes and Asean centrality. They also reiterated the importance of adherence to international law to meet challenges to the rules-based order, including in the South China Sea.”

Summing up the talks, Mr Jaishankar said: “Challenges in the Indo-Pacific have also been a particular focus of our discussions… Indeed, the Quad has emerged as a powerful force of global good.”