Pak hits out at India, US over terror swipe 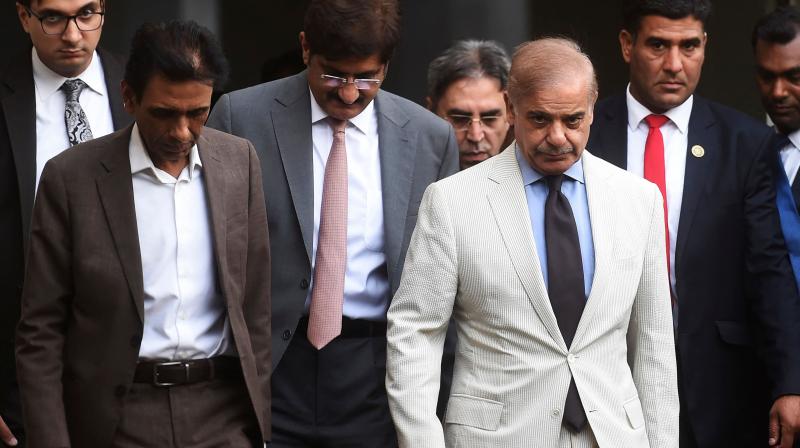 New Delhi: The new Shehbaz Sharif government in Pakistan on Wednesday hit out at both India and the United States over the reference in their joint statement asking Pakistan to prevent the use of territories under its control by terrorists, adding that Islamabad’s “concerns and rejection of the unwarranted reference to Pakistan in the US-India statement have been conveyed to the US side through diplomatic channels”. Pakistan said some organisations named as terror outfits in the joint statement had been “dismantled”, adding that “it is unfortunate that a bilateral cooperation mechanism is being used to target a third country for political expediency and to mislead public opinion”. A furious Islamabad also said the reference was “malicious” and one which “lacks credibility”.

This is the first time that the new government in Islamabad has hit out at both countries. Ironically, former PM Imran Khan, who lost power just a few days ago, had in his last days in office accused Mr Sharif of being an American “stooge”. This also comes after the new PM, Mr Sharif, had on Tuesday thanked Prime Minister Narendra Modi for his congratulatory message on Monday, saying that while Pakistan desires peace with India, a peaceful resolution of the Kashmir issue was “indispensable”. Amid speculation, it also remains to be seen if Mr Modi will write to his new Pakistani counterpart as part of a fresh outreach to Islamabad.

The India-US joint statement that was issued on Tuesday after the 2+2 talks between the two countries at the foreign and defence ministerial level in Washington had said: “The ministers (US secretary of state Antony J. Blinken, US defence secretary Lloyd J. Austin, external affairs minister S. Jaishankar and defence minister Rajnath Singh) strongly condemned any use of terrorist proxies and cross-border terrorism in all its forms and called for the perpetrators of the 26/11 Mumbai attack, and the Pathankot attack, to be brought to justice. They called for concerted action against all terrorist groups, including groups proscribed by the UNSC 1267 Sanctions Committee, such as Al-Qaeda, ISIS/Daesh, Lashkar-e-Tayyaba, Jaish-e-Mohammad and Hizb ul Mujahideen. The ministers called on Pakistan to take immediate, sustained, irreversible action to ensure that no territory under its control is used for terrorist attacks.”

But an angry Islamabad said Wednesday: “Pakistan categorically rejects the unwarranted reference in the statement issued after the US-India 2+2 Ministerial Dialogue on 11 April 2022. The gratuitous reference in the statement alluding to some non-existent and dismantled entities betrays misplaced counter-terrorism focus of both countries. It is unfortunate that a bilateral cooperation mechanism is being used to target a third country for political expediency and to mislead public opinion away from the real and emerging terrorism threats. The assertions made against Pakistan in the statement are malicious and lack any credibility.”

It added: “Pakistan has remained a major, proactive, reliable and willing partner of the international community in the global fight against terrorism over last two decades. Pakistan’s successes and sacrifices in countering terrorism are unparalleled and widely acknowledged by the international community, including the United States. No country in the region has sacrificed more for peace than Pakistan.”

Pakistan also attacked New Delhi on the Kashmir issue in a fresh diatribe and accused New Delhi of committing atrocities. “We expect and urge the partner countries to take an objective view of the issues of peace and security in South Asia and refrain from associating themselves with positions that are one-sided, politically motivated, and divorced from ground realities,” it said, in an obvious reference to the United States.