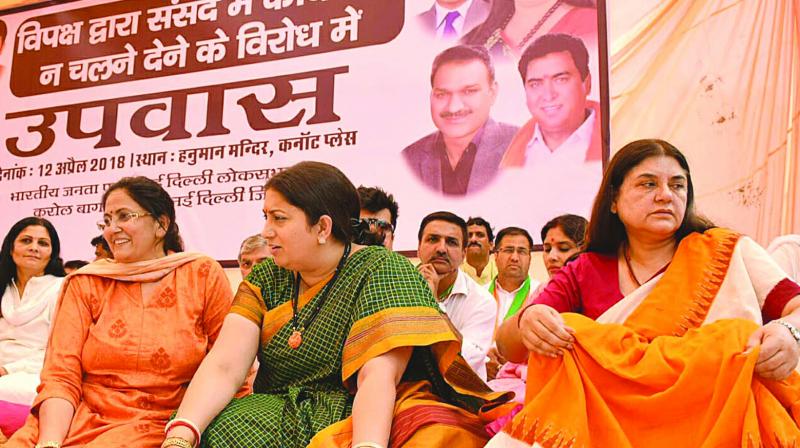 Union ministers Smriti Irani and Maneka Gandhi sit on a day-long protest in New Delhi on Thursday against the disruption of Parliament proceedings by the Opposition. (Photo: G.N. Jha)

New Delhi: Prime Minister Narendra Modi led the top leadership of the BJP in observing a fast on Thursday to protest the washout of the second phase of the Budget Session of Parliament for which it blamed the Congress.

The Congress on its part said instead of indulging in the “theatrics of a farcical fast”, the government should ensure that Parliament be reconvened to debate and legislate on key issues and said the time had come for the BJP to “repent and apologise” to the nation.

While Mr Modi and Union home minister Rajnath Singh went on with their work while on fast, several ministers, among them Prakash Javadekar, Mukhtar Abbas Naqvi and Piyush Goyal, travelled to different parts of the country to sit on fast and attack the main Opposition.

“The Congress knew very well that they cannot debate in any of the Houses so they did not let the Parliament function. The BJP was left with no choice but to go to the people as it is the biggest forum for us,” Mr Shah said.

The Lok Sabha members of the party mostly sat on a protest fast in their constituencies, while most of the Rajya Sabha members did so in their states.

The Prime Minister had earlier asked his MPs to “expose” the Opposition which, he said, had “throttled” democracy by stalling Parliament proceedings during the Budget Session.

The Congress, meanwhile, asked the Prime Minister to observe fast over rape incidents and register his protest agai-nst Uttar Pradesh chief minister Yogi Adityanath over the Unnao rape case. He further questioned the Prime Minister for not fasting when “Nirav Modi fled the country, when the CBSE papers were leaked, when the SSC papers were leaked”.

Congress senior spokesperson Anand Sharma accused the BJP of “orchestrating” disruptions in Parliament to avoid a debate on issues such as the multi-crore-rupee bank scam involving Nirav Modi and Mehul Choksi, the CBSE paper leak, the SC/ST Act issue and farm distress.

“It is time for the Prime Minister and the BJP to reflect, repent and apologise to the people of the country instead of engaging in the theatrics of a farcical fast. Let the government reconvene Parliament to debate and legislate,” he told said.