Modi expressed surprise at the Opposition’s stand as, he said, members of all parties had been urging him to bring the legislation. 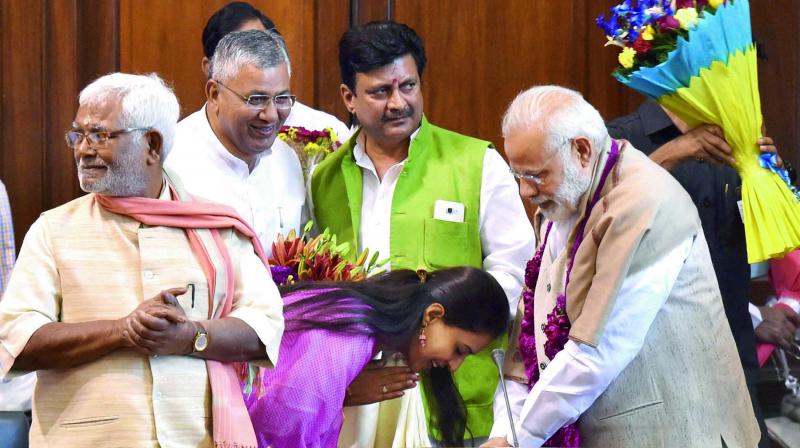 Prime Minister Narendra Modi greeted by BJP MP Pritam Munde at a function in New Delhi on Wednesday to thank him for the passage of the OBC bill in the Lok Sabha. (Photo: PTI)

Among other things, once the bill becomes law, states will not be able to add or delete castes from the backward classes’ list without Parliament’s approval.

Addressing the party’s OBC MPs in Parliament, who thanked him for bringing in the legislation, Mr Modi expressed surprise at the Opposition’s stand as, he said, members of all parties had been urging him to bring the legislation.

“The bill was passed unanimously in the Lok Sabha but blocked in the Rajya Sabha (by Opposition parties). Denying the backward sections their rights with such negative politics is regrettable,” Mr Modi told party MPs. He said the satisfaction that one gets by working for the poor is incomparable and said people from the backward castes have self-respect and would never forget generosity.

The Rajya Sabha had on Tuesday referred the Constitution (123rd) Amendment Bill, 2017, which had been passed by the Lok Sabha, to the select committee under pressure from the Opposition. The ruling NDA does not have a majority in the Upper House.

The committee, headed by BJP member Bhupender Yadav, has been asked to submit its report by the last day of the first week of the next session. The 25-member committee also includes JD(U)’s Sharad Yadav, SP’s Ram Gopal Yadav, BSP’s Satish Mishra and NCP’s Praful Patel.

Asking the BJP’s OBC MPs to create awareness about the legislation among people from the backward class as it was their “moral responsibility”, the Prime Minister also asked them to reach out to their counterparts in other parties and convince them to support the landmark legislation.