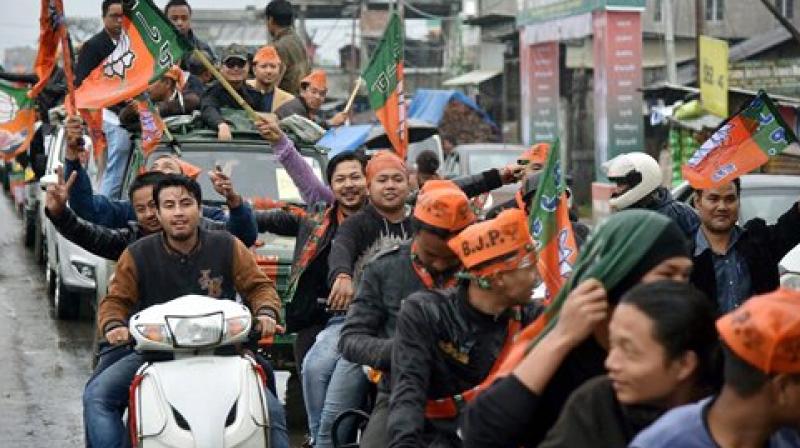 Guwahati: BJP general secretary Ram Madhav, who is camping in Imphal, on Sunday announced it had got the support of 31 MLAs and was going to stake claim to forming the government in Manipur.

Saying that a BJP delegation was going to meet Manipur governor Najma Hepetullah at around 8 pm, Mr Madhav told reporters that leaders of the Nagaland Peoples’ Front, National People’s Party, Trinamul Congress and Lokjanshkti Party would accompany the BJP leaders.

Mr Madhav said one Independent MLA who was going to meet the governor in a short while had also agreed to extend support to the BJP. “He will be meet the governor separately and hand over his letter of support,” said Mr Madhav, adding the results were a clear mandate against the Congress and the Ibobi Singh government. (One Congress MLA has offered to support BJP, taking the number of legislators backing the saffron party to 32).

Sources in Imphal told this newspaper that Assam’s finance minister and North-East Democratic Alliance convener Himanta Biswa Sarma had played a key role in breaking the deadlock with National People’s Party leader Conrad Sangma, son of the late P.A. Sangma, who was not very happy at the way his party was treated in the National Democratic Alliance. The NPP, founded by P.A. Sangma, was a part of the NDA but was ignored after the BJP came to power in 2014.

Earlier, a NPF spokesman said: “We are in alliance with the NDA and therefore we will support the North-East Democratic Alliance, which comprises non-Congress parties, even in Manipur.” He asserted that the NPF will not join the Congress even if approac-hed to form the government in the state, maintaining the party’s earlier stance to make the region Congress-free.

While the BJP is tightlipped about its chief ministerial candidate for Manipur, sources said that BJP spokesman N. Biren had emerged as the frontrunner in the race.

The Naga Peoples’ Front (NPF) and National People’s Party (NPP) have bagged four seats each, while the Lokjanshakti Party, TMC and an Independent candidate have won one seat each. The ruling Congress has emerged as the largest party by winning 28 seats, followed by the BJP with 21 seats in the 60-member Assembly.