India did not concede any territory to China in disengagement pact: Defence Ministry 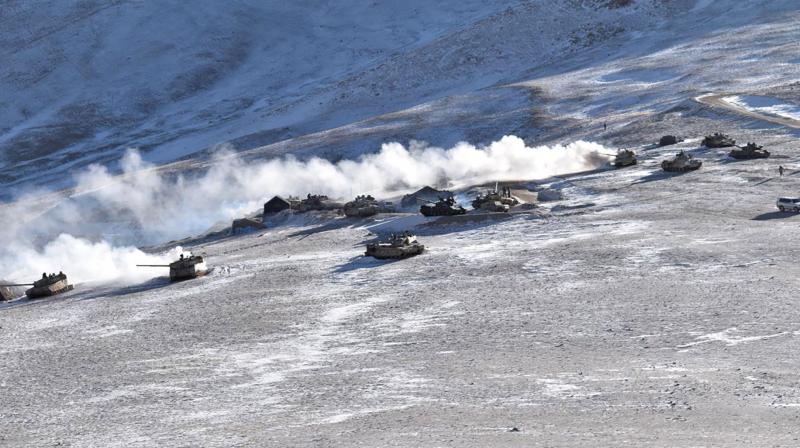 Tanks pull back from the banks of Pangong Tso lake region, in Ladakh along the India-China border on Wednesday, Feb. 10, 2021. (AP)

New Delhi: The defence ministry said on Friday that India had not conceded any territory to China in the disengagement agreement on Pangong Tso and that the next military-level talks will take up the outstanding issues at Hot Springs, Gogra and the Depsang plains in eastern Ladakh. The MoD statement also said India has persistently maintained the right to patrol till Finger 8 in Pangong Tso, including in the current pact with China.

“India has not conceded any territory as a result of this agreement. On the contrary, it has enforced observance and respect for the LAC and prevented any unilateral change in the status quo,” the MoD said.

The defence ministry said it had taken note of some “misinformed and misleading” comments on the disengagement underway at Pangong Tso. This comes after Congress leader Rahul Gandhi accused Prime Minister Narendra Modi of “giving away sacred Indian territory to China”. Mr Gandhi said the Indian Army held the Finger 4 area in Ladakh along the Line of Actual Control, but now it will move back to its permanent base near Finger 3.

As per the agreement, the Chinese troops will move east of Finger 8 on the north bank of Pangong Tso and the Indian troops will move to their permanent base at Dhan Singh Thapa Post near Finger 3. The area between Finger 4 and Finger 8 will be “no go” zone for some time for both the armies.

The ministry said the assertion that Indian territory is upto Finger 4 is categorically false. “Even the Line of Actual Control, as per the Indian perception, is at Finger 8, not at Finger 4. That is why India has persistently maintained the right to patrol upto Finger 8, including in the current understanding with China,” the MoD said. It said the permanent posts of both sides at the north bank of Pangong Tso are longstanding and well established. “On the Indian side, it is Dhan Singh Thapa Post near Finger 3 and on the Chinese side, east of Finger 8,” it said. The current agreement provides for the cessation of forward deployment by both sides and continued deployment at these permanent posts, it said.

The MoD also said that defence minister Rajnath Singh’s statement in Parliament on Thursday had also made clear that there are outstanding problems to be addressed, including at Hot Springs, Gogra and Depsang. “The outstanding issues are to be taken up within 48 hours of the completion of the Pangong Tso disengagement,” said the statement. It noted that effective safeguarding of our national interest and territory in eastern Ladakh sector has taken place as the government had reposed full faith in the capabilities of the armed forces. “Those who doubt the achievements made possible by the sacrifices of our military personnel are actually disrespecting them,” it added.