Grand alliance to take call on Bihar seats by weekend

Sources said that the RJD has offered 10 seats to the Congress and wants to keep 20-22 of 40 LS seats in Bihar. 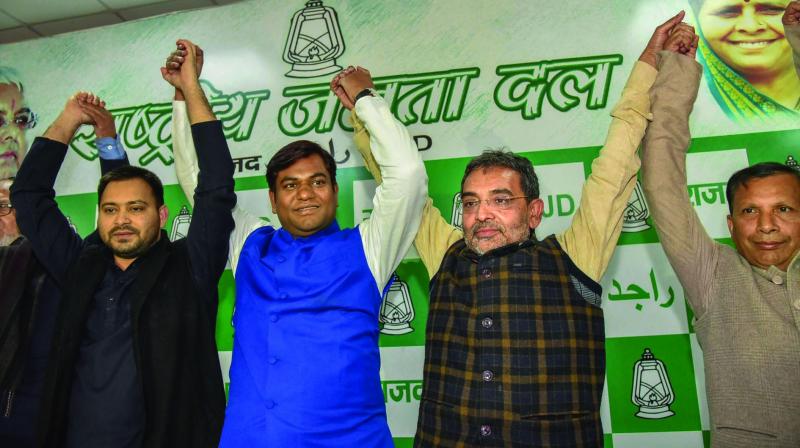 A file photo of RJD leader Tejashwi Yadav with other grand alliance leaders in Patna.

Patna: Grand alliance partners are likely to hold a fresh round of discussions by the end of this week to resolve the issue of seat sharing.

Sources said efforts are being made to build a consensus between the two main parties in the alliance, the RJD and the Congress, to resolve the issue at the earliest. Grand alliance insiders said that both the parties have so far failed to agree on the number of seats they would want to contest in the general elections.

Sources said that the RJD has offered 10 seats to the Congress and wants to keep 20-22 of 40 Lok Sabha seats in Bihar. The other partners in the grand alliance are being offered the remaining seats for the general elections.

“Grand alliance partners must understand that the RJD has a larger base than any other political parties in Bihar. Efforts are being made to settle the matter soon. The seat-sharing deal will be finalised with consensus. There is no problem,” said RJD state president Ram Chandra Purbe.

In the last Lok Sabha election, RJD and Congress had contested 27 and 13 seats.

The RJD won four and the Congress three seats.

However, reports suggest that the Congress wants to contest at least 15 seats this time. Former Union minister and RLSP chief Upendra Kushwaha, who had left NDA and joined hands with grand alliance in December last year, also wants a “sizeable” seat share for his party.

Other parties waiting for the RJD to settle seat-sharing deal include Mu-kesh Sahani’s Vikasheel Insan Party and Sharad Yadav’s LJD.