Yogi Adityanath told reporters that Yadav’s visit could have triggered violence between rival student groups at the university. 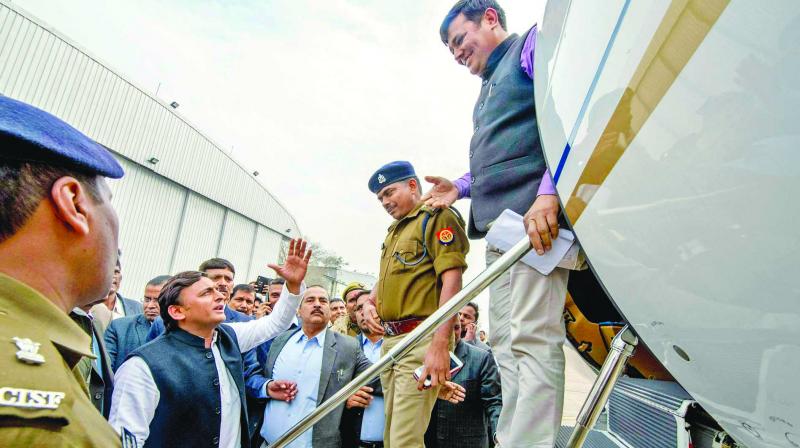 Samajwadi Party president Akhilesh Yadav being prevented by district officials from boarding a flight for Prayagraj at Lucknow airport on Tuesday. (Photo: PTI)

Lucknow: Samajwadi Party president and former Uttar Pradesh chief minister Akhilesh Yadav claimed on Tuesday that he was detained at Lucknow airport and not allowed to board a plane to Prayagraj “on oral orders”, triggering outrage by party lawmakers in Parliament, the state legislature and workers outside the airport.

Mr Yadav, who was on his way to attend the oath-taking ceremony of a student leader at Allahabad University, lashed out at the Yogi Adityanath government saying this government believes in “roko, thoko neeti” (policy of stop and encounter).

“The government is afraid of oath-taking ceremony of a student leader and is stopping me at the airport to prevent me from visiting Allahabad,” Mr Yadav claimed on Twitter and posted photographs in which he was seen talking to police officers inside the airport.

Mr Yadav had reached the Lucknow airport on time but when he was about to board a special flight, he was stopped from climbing the stairs of the aircraft by the UP police and a man in plain clothes. Mr Yadav argued with the person and in a video put on his Twitter handle was heard warning “haath mat lagao (take your hands off me)” after which his security team pushed the man aside. Sources said the man was a UP government official.

Amid all this high drama, Mr Yadav kept tweeting that he was “prevented from boarding the airplane without any written orders”.

Chief minister Yogi Adityanath told reporters that Mr Yadav’s visit could have triggered violence between rival student groups at the university. “The Allahabad University had urged the government to stop his visit and the government acted,” he said. In December last year, Samajwadi Party backed candidate Uday Yadav had won the university union poll.

The SP chief was also said to have had planned to visit the Kumbh Mela on Tuesday.

The issue rocked the Rajya Sabha as SP and other Opposition parties protested over the incident, disrupting the proceedings of the House.

The matter also caused an uproar in both Houses of the Uttar Pradesh legislature and SP workers clashed with police in several parts of Uttar Pradesh.

Protests broke out in Allahabad, Jaunpur, Jhansi, Kannauj, Balrampur, Jalaun, Azamgarh and Gorakhpur, among other places, where SP supporters smashed windscreens of vehicles and clashed with the police. Roads were blocked in Gorakhpur.

SP leader Indrajeet Saroj, who accompanied Mr Yadav at the airport, said, “We have been stopped on oral orders. We are asking (airport authorities) to give in writing. Akhileshji had to attend several programmes in Allahabad. The administration did not follow protocol meant for a former CM.”

Principal secretary (Home) Arvind Kumar said the university administration did not permit any political programme on the campus fearing breach of peace.

“Due to Kumbh, there is a huge congregation in Prayagraj. The district administration had intimated the ex-CM’s office and Lucknow DM about the university decision,” he said.

Addressing a hurriedly convened press conference, Mr Yadav alleged that the Centre was “involved” in stopping him at the airport here and preventing him from flying to Allahabad.

“I think the government at the Centre is also involved in stopping me. State police cannot enter airport as its security is in Centre’s hand,” he claimed.

He described Mr Adityanath’s comments that his visit could have triggered violence as “a cover to hide nervousness” and said that stopping him showed how “scared” the government is.

Extending support to Mr Yadav, BSP chief Mayawati said the incident was extremely condemnable and asked whether the ruling BJP was afraid of their alliance because of which it is “resorting to anti-democratic methods”.

She described the episode as “an example of total dictatorship of BJP government”.

“This is very unfortunate and this undemocratic step will be fought at all levels,” she said.

“Are the BJP governments at the Centre and in Uttar Pradesh so afraid of BSP-SP alliance that they are resorting to anti-democratic methods to curb our political activities,” she asked.

The SP and the BSP recently forged an alliance for the upcoming Lok Sabha elections.

West Bengal chief minister Mamata Banerjee condemned the “arrogant attitude of the BJP leaders” and said that those who stop a former chief minister from meeting students shouldn’t give lessons to others.

“If under Yogi Adityanath’s rule, a former Chief Minister is not allowed to attend a college event then there is ‘rukawat’. ‘Rukawat ke liye khed hai.’ There is such a situation in the country today that people are not allowed to go to places,” Ms Banerjee told a news agency.