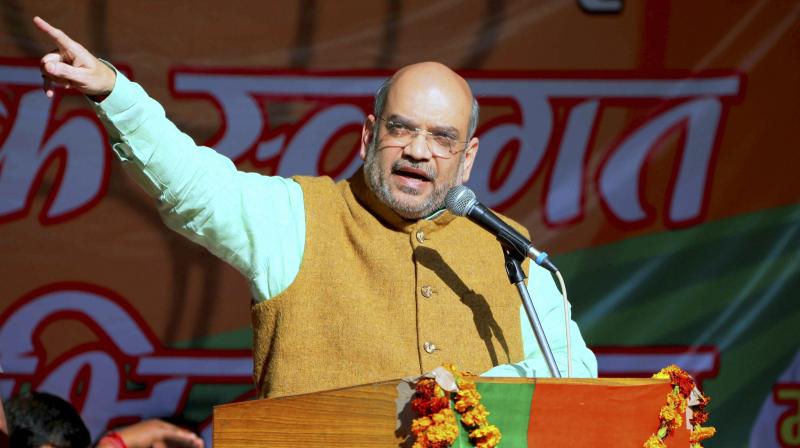 Lucknow: BJP chief Amit Shah on Sunday said BSP is the main rival in first two phases of Uttar Pradesh Assembly polls and Samajwadi Party in the rest, as he accused Akhilesh Yadav of getting into an “unholy alliance”.

“As per the trend of first phase, we will get more than 50 seats (out of 73). In the first two phases we will be getting more than 90 seats (out of total 140). The main rival in these two phases is BSP. In the next phases, the rival will be SP,” Mr Shah said.

He said that this assumption was based on the feedback received form party workers and leaders who had extensively toured the region. Mr Shah said that in the second phase, the party’s expects to win more than 40 seats.

He said that his party had received encouraging response from the people who went through its manifesto. He pointed out that issues like prompt payment of cane dues to farmers, loan waiver for small farmers and setting up of anti-Romeo squads had found favour with the voters.

He claimed that issues like payment of cane dues, loans at zero per cent interest to farmers, anti-Romeo squads to check crime against women, and some other key points in BJP manifesto had attracted youth and common people and they were supporting BJP.

Terming the Congress-SP alliance as “unholy”, Mr Shah said if SP had considered what Lohia had thought about Congress, it would not have forged the pact.

“This is alliance of those who ran corrupt governments. UP is behal (suffering) in this regime and cases of riots, rapes and murders have increased. Due to appeasement on basis of caste and religion, people are harassed and they want development. SP government has failed miserably,” he said.

Attacking the Akhilesh government, he said that the state had not cooperated with the Centre on the development issue. “We sent Rs 2.5 lakh crore extra to Uttar Pradesh in two and a half years but the state government did not properly use the funds for development”, he said.

Mr Shah announced that if the BJP came to power, it would order an inquiry into cases of corruption and the guilty persons would be punished. He said that SP and BSP only made tall claims but did not take action against each other in matters related to corruption.