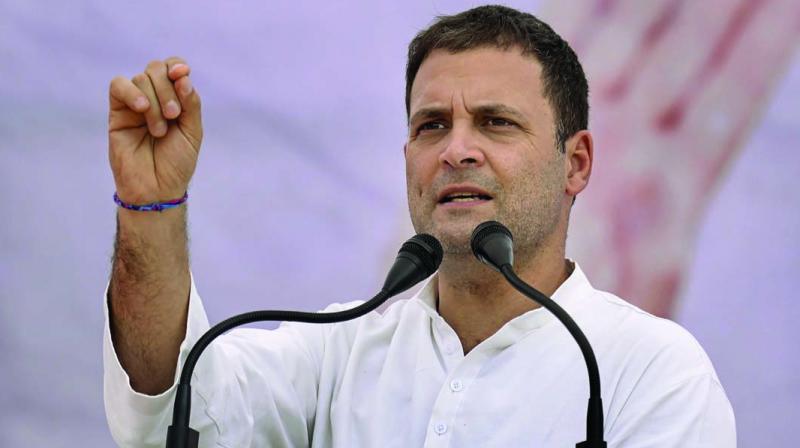 New Delhi: As Congress president Rahul Gandhi emerged victorious with his party set to wrest the BJP strongholds of Rajasthan, Chhattisgarh and tightly-contested Madhya Pradesh, worry lines finally appeared on the forehead of the saffron parivar. With the Lok Sabha elections barely months away, a defeat in the Hindi heartland regarded as the nation’s bellwether region is set to give invincible duo Narendra Modi and Amit Shah sleepless nights.

If the elections were being seen as a resurgence of the Congress, the polls also saw the return of dalit queen Mayawati, whose Bahujan Samaj Party made significant gains in Madhya Pradesh and Chhattisgarh.

The results didn’t merely indicate that regional satraps would continue to play a key role, but they also put a spoke in TDP supremo N. Chandrababu Naidu’s ambition to emerge as the main face of the Opposition after the TDP-Congress’ humiliating defeat in Telengana. TRS chief K. Chandra-shekhar Rao could well be the new face in the Opposition block.

While Rajasthan voted on the expected lines by changing the ruling party every five years, a complete rout in Chhattisgarh came as a major shock for saffron forces. “I take the responsibility for this defeat because the poll was contested under my leadership. We will act as a strong Opposition and work for the development of the state,” outgoing Chhattisgarh CM Raman Singh said.

With Rajasthan and Chhattisgarh definitely in its kitty, a confident Congress president continued to attack Prime Minister Narendra Modi and called him “bhrasht” (corrupt), and claimed this was the main reason for the BJP’s        n Turn to Page 4
debacle in the Hindi belt.

What hit the BJP in the Hindi heartland was the rage of farmers and agrarian distress. Uttar Pradesh chief minister and Hindutva poster boy Yogi Adityanath’s repeated rallies in Chhattisgarh and Rajasthan to consolidate the Hindu votebank failed completely. Rejecting aggressive Hindutva, rural Rajasthan, Chhattisgarh and Madhya Pradesh voted overwhelmingly in favour of the Congress. What apparently gave the Congress an edge in Madhya Pradesh was the party’s announcement that it would waive loans and give free electricity to farmers.

The dalit and OBC factors also worked against the BJP. This massive votebank, which had moved to Mr Modi in 2014, returned home to the BSP and Samajwadi Party.

In Chhattisgarh, the combination of Ajit Jogi (Janata Congress Chhattisgarh) and Mayawati hurt the BJP more as it cut into the party’s backward votebank. Also the Prime Minister’s apparent “failure” to deliver in employment generation and control price rise added to the saffron woes.

Regardless of the defeat, the BJP drew solace from the fact that despite 15 years of incumbency in Madhya Pradesh and Rajasthan chief minister Vasundhara Raje’s so-called “unpopularity”, it successfully resisted a complete rout and gave the Congress run for its money.

Ms Raje submitted her resignation to the state governor and said: “I accept this mandate by the people. The BJP has worked a lot for them in these five years, I hope the next party takes those policies and works forward.”

While it seemed that the Congress has been able to produce a successful counter-narrative to BJP, the party still has miles to go to dethrone Narendra Modi in the Lok Sabha elections. However, the Assembly poll results have given a clear indication that the BJP would now be constrained to take Mr Gandhi as a serious contender and not delegate a rabble-rousing spokesperson to counter him. Starting from Gujarat, the Congress president had begun rapidly encroaching into the BJP’s Hindutva turf. Promises of cow shelters, among others, dominated the Congress election manifesto in Madhya Pradesh, a strategy BJP was clearly not ready for.

As for Opposition unity, the results indicate that a conglomeration of anti-BJP forces would not be possible without the Congress being at its centre. Similarly, the Congress too has to hold hands with the regional players to firm up a grand alliance and put up a fight against Mr Modi, whose popularity ratings remain much above that of Mr Gandhi.

Though these elections were being viewed as the “semi-final” before the 2019 “final”, the BJP, sensing the tough ground realities, used the Prime Minister sparingly. Mr Modi, who held nearly 35 rallies during the Gujarat Assembly polls, held a total of merely 30 rallies in the five poll-bound states. In comparison, Mr Gandhi criss-crossed all the states and held over 82 public rallies.