Regional satraps like Mamata and Akhilesh will now have to accept Rahul Gandhi as the leader of the ‘Mahagathbandhan’. 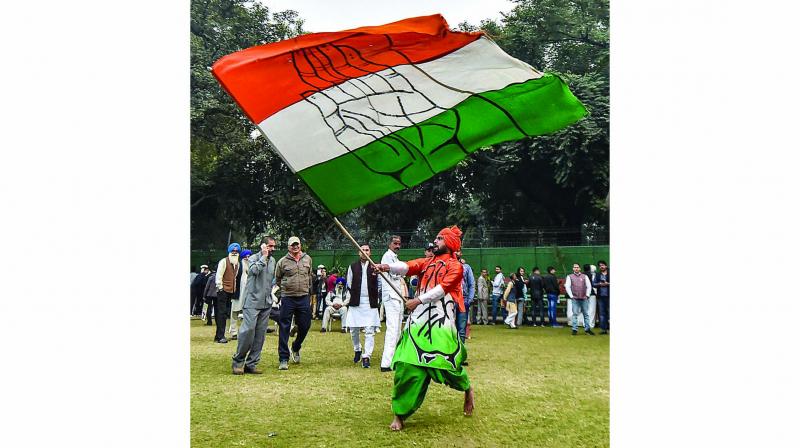 A Congress supporter waves a flag at the party headquarters in New Delhi on Tuesday after the party’s win in the Assembly elections in Rajasthan, Chhattisgarh and Madhya Pradesh. (Photo: PTI)

New Delhi: The Assembly polls results in Madhya Pradesh and Chhattisgarh, where the Congress has managed to pull of victories after a long drought of 15 years (well almost as at the time of going to the press, the contest in Madhya Pradesh was delicately poised), could well be an indicator that the road to the 2019 Lok Sabha polls may not be an easy ride for the BJP-led NDA.

The results could well change the power dynamics in the 17th Lok Sabha which will come into existence post the 2019 general elections.

The reason behind this rationale is clear, as not only both these states had brought the BJP to power in the assemblies three times in a row, but even sent more MPs from the saffron party than the Congress, to the Lok Sabha in the past three Lok Sabha polls, despite the fact that the Congress-led UPA had won two consecutive general elections in 2004 and 2009. Considering this pattern, the Congress’ poll wins in both these states could well be an indicator towards an interesting scenario in the 2019 Lok Sabha polls.

Wins in both these states as well as in Rajasthan, will give Congress a more dominant role in forming a national alliance of Opposition parties to combat Narendra Modi-led BJP in the 2019 Lok Sabha polls. Regional satraps like the Samajwadi Party chief Akhilesh Yadav, Bahujan Samaj Party (BSP) supremo Mayawati and Trinamul Congress head Mamata Banerjee will now have to accept Rahul Gandhi as the undisputed leader of the ‘Mahagathbandhan’.

Rajasthan, where people go for change in each Assembly poll, seems to have an uncanny knack of identifying potential winners.

While voters there seem to have wrongly anticipated NDA’s victory in the 2004 Lok Sabha polls (where the UPA had pulled off an improbable win) by sending 20 MPs from BJP to the lower house compared to a paltry four from the Congress (after the BJP had won the 2003 assembly polls there), its assembly elections results in 2008 and 2013 have been bang on as the winning party there went on to form the government at the Centre.

Chhattisgarh has been more ruthless to the Congress. Despite the party  winning the 2004 and 2009 Lok Sabha polls, it managed to send only one MP each in both the polls to Parliament as the BJP stormed all the remaining seats.

The predominantly tribal state, which has 11 Lok Sabha seats, followed the same pattern in the 2014 general elections and elected only one Congress MP for the 16th Lok Sabha.